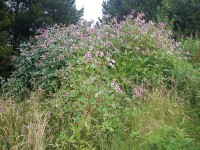 With the growing season now in full swing, all greenkeepers are at their busiest time of year keeping the course well manicured and maintained.

In my experience, ecological initiatives take a back seat during this time, which allows us to keep up with the general greenkeeping activities involved in presenting the best course possible to the people who play.

However, the window of opportunity for tackling the invasive Himalayan Balsam (Impatiens glandulifera) is now, proverbially, wide open and action needs to be taken quickly if you are to prevent its spread on your course.

Invasive weeds, such as Himalayan Balsam, are a threat to high quality habitats throughout the UK and can quickly destroy all the good work that is performed on a golf course. It is a non-native (obviously coming from the Himalayas of southern China), invasive, introduced plant in the UK which has escaped from Victorian gardens and into the wider environment. It is an annual plant growing to about 2m, with purplish-pink slipper shaped flowers from June to August.

Considered a big problem in the UK, it spreads rapidly across both wet and dry ground and grows in dense stands that suppress the growth of native flora. The mature seed pods explode when touched, scattering the seed, which is further dispersed by water or the activities of people, including golfers searching for that stray ball.

Himalayan Balsam is one of over thirty new additions to Schedule 9 of Wildlife and Countryside Act (1981). The amendment came into force as of the 6th of April 2010, which now means it is illegal to allow spread of the proscribed weeds onto neighbouring land. If you have any invasive weeds listed on Schedule 9 near the border of your land take immediate steps to control it.

Eradication of Himalayan Balsam should ideally be performed in June or July when the plants are big enough to handle and before the plants have set seed. It is important that you do not disturb plants if seedpods are visible to prevent further additional spread - normally, this is sometime after late June but, with this year's late spring, seed pods will be developing later than normal.

There are two suggested methods of removal that relate to different stages in the plants dominance within the habitat. Unfortunately, there are no selective weedkilling products for this plant, so there is no quick fix, and spraying the infected areas with weedkiller products will remove all vegetation, so is not recommended.

Method 1: Strimming: This is the preferred method when Himalayan Balsam is the dominant vegetation type, forming dense stands, and damage to native wildlife by removal will be at a minimum. Simply strimming the plants has proved to be a very effective method to remove this species providing you strim at the base below the lowest node - this prevents regrowth and kills the plant outright. This method will have to be repeated a year later to catch all the plants that have grown from previous seed stock present within the seed bank - Himalayan Balsam seed live for two years within the seed bank. 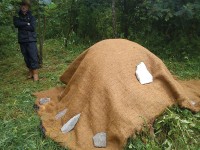 Method 2: Hand Removal: This is the preferred method when Himalayan Balsam is present within important habitats amongst other native vegetation, or where disturbance to native wildlife will be detrimental by strimming. This may prove to be a time consuming task, especially if present in a large area in and amongst other vegetation. Fortunately the plants are very shallow rooted and can, therefore, be hand-pulled from the affected area. Pulling the plants up every year for two/three years will eradicate it.

In both cases above, removed plants should be gathered and covered with some type of sheet to prevent light getting through. As the plants have a high water content, this will allow them to rot down quickly. The decomposed plants should then be disposed of in your green waste area. It is very important to perform further frequent inspections of the affected areas to allow you to determine the success of removal and remove any missed plants.