8 Be wary of using glue

Be wary of using glue 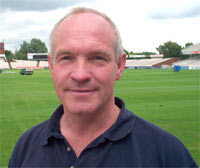 There has been a lot of talk recently on the message boards about using glue to stabilise wickets, so I thought I'd clarify my use of PVA glue at Old Trafford.

We started to use the glue last year at the ground when one of our guys, Gerard Carter suggested that it might work well. Gerard had used glue at his previous club in Wellington, New Zealand.

Although we thought it was quite laughable at first my philosophy is, you can but try, so we made up a mix and sprayed a strip or two in the practice nets. The results went extremely well. The glue provided a little film across the surface and binded the top pretty well.

Having seen the results, I spoke to the board initially but they were fairly negative.

After a while I suggested again to them that we should trial the gluing process, and this time we agreed to do the U19's test pitch and 2 one-day pitches, this also proved very successful.

My worry though about all the current talk, the speculation on the TV and in the press, Groundsmen everywhere will think it's the solution to all their problems. Well it's not.

Using glue doesn't sort out any problems other than slightly prolonging the life of a pitch, and this is only of benefit for one-day games. I wouldn't consider using glue for any game longer than a day, because the whole point of a three, four or five day game is that the conditions degenerate for both batsmen and bowlers.

Everyone must remember that at Old Trafford, we have very hard wickets, and the use of glue in our situation has helped to keep a one-day track from breaking up, allowing its re-use maybe two months later. At our level, with the use of covers and the amount of studded foot traffic on the square, the glue does give the pitches a longer life.

In the nets, where balls are constantly pitched in the same place, the glue again prolonged the use of the surface during practice. However the balls do not bounce better or travel at a faster pace.

The pitch though has to be right underneath; soft ground, which many club sides play on and low and slow wickets will not be improved. Resolve those problems first before even contemplating the use of glue. Most grounds will never reach the hardness that we are able to create at Old Trafford, the glue is used just to seal the top, and on a pitch that's like concrete, it can work fine, any pitch that has give in it, the glue will not really be of benefit.

I'm also worried that Groundsmen will go and put on too much glue and maybe the wrong type of glue. We trialed various glues and settled on the Unibond Super PVA, it costs more but gave us the consistency that we were looking for. We use it sparingly, spraying approximately 20 litres of glue mix (4 parts water: 1 part glue) through a knapsack sprayer to each pitch.

We put the glue on at least a day before the game, let it soak in and harden off, before a final roll on the day of the match.

So far we haven't seen any agronomic adverse affects using glue, it breaks down quickly after use and we've had no problem with over seeding and establishing grass after use.

If you are going to try glue then exercise caution, try it on your practice area, and try a few different solutions until you find what may work best in your situation.