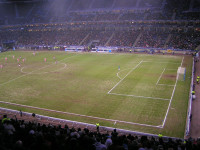 The multi-award winning BeamRider laser line marker has just returned from Germany where it was used to over-mark the existing lines at Hamburg's new AOL Arena.

The BeamRider system was invited over to mark out the pitch for the UEFA cup tie match between Hamburg SV and Slavia Prague. The system was put through its paces in front of the stadium's Head Groundsman and his team.

All those attending were extremely impressed with the results, the ease of use and the speed and efficiency of the operation. The BeamRider is set to carry out further demonstrations to all the major clubs in Germany early next year.

BeamRider's business manager Phil Sharples said "It has been a tremendous few months for us since the launch of the concept and prototype at Saltex this year. We have won awards for innovation at ScotsTurf from the IOG and at the National Turf Foundations conference in Blackpool. So far the feedback we have received has been really positive and it seems we have provided a real solution for the industry. The year is ending on a high and all the BeamRider team are looking forward to 2006 when the full production version is due to be released for sale."

The result? Hamburg won the tie 2-0 and of course, we put it all down to the quality of the lines!

Contact Phil Sharples for further information on the BeamRider on 07920010089