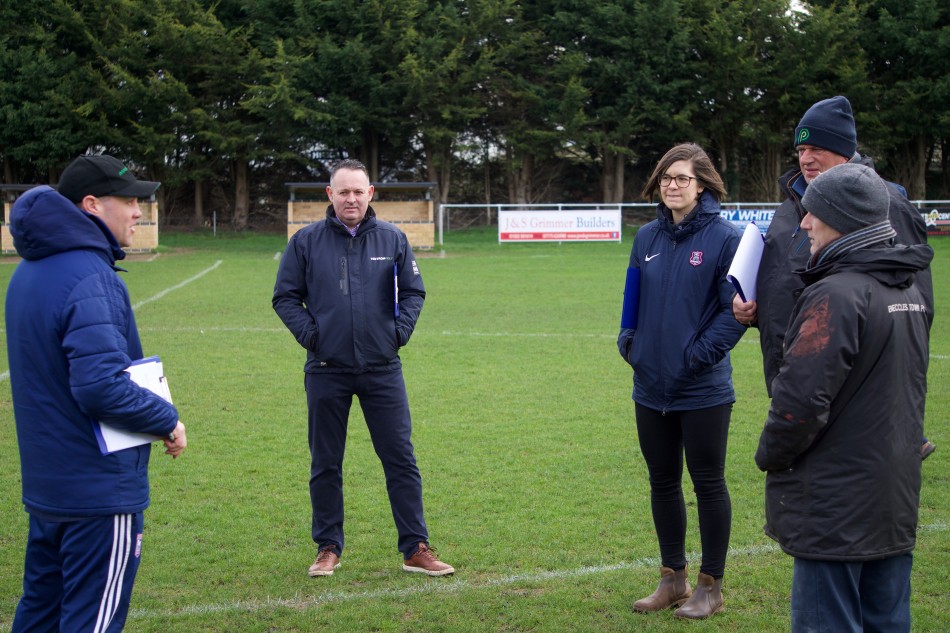 The competition, which is open to clubs who play in Step 7 and below in Suffolk, has been sponsored by Ransomes Jacobsen for many years and has played an important role in raising the quality of football pitches in the county.

After entering for the first time last year and being placed first, Beccles' joint groundsmen Chris Brown and Shaun Soloman were again judged as this year's winners. They just beat Adrian Waters of Halesworth Town, who entered for the first time, to this year's title with Tony Adams of Claydon FC finishing third.

Beccles Town joint groundsman Shaun Soloman said: "This just makes it all worthwhile. We don't do it to get recognition but for the town and the people of the town and especially the kids to be able to play on a decent pitch that we never had the chance to do as it used to be a mud bath."

This year's competition was one of the hardest to judge with the quality of pitches rising in Suffolk, and lead judge, Ben Connell, has been pleased to see the initiatives from different parties having an impact.

"I've been taking part in the judging for seven years, and the standards are getting better and better. I've seen the pitches improve over that time and I'd put that down to the dedication of the groundsmen and the support and advice they get from the Suffolk FA and the IOG.

"This competition has been a great initiative, and along with the funding from the FA and IOG, it has really made a difference to grassroots football in Suffolk because the pitches are getting better. Without the sponsorship of the competition from Ransomes Jacobsen and the support from the FA and IOG, we wouldn't have got to this point, and I'm looking forward to seeing further progress."

Steve Alabaster from Ransomes Jacobsen added: "I'm quite taken aback and astounded by how much work the volunteers put in, especially when they have to finance a majority of the work themselves. Some of these guys have hardly got anything at all, and they're producing fantastic surfaces for kids and adults to play on. I was really surprised that every pitch we saw wasn't waterlogged because of the heavy rain we've had, and it is incredible that they're doing that with such little resources - each pitch we've seen is a credit to the groundsmen who maintain them.

"It's fantastic to be able to big up these guys because they don't always get much recognition and it's a wonderful opportunity for us to partner and support the Suffolk FA. It's something we've been doing for a number of years that we're very proud to be part of."

In addition to being crowned as Groundsman of the Year, Beccles Town will receive £200 to be spent on groundscare equipment, with Halesworth Town receiving £100 and Claydon £50. All three clubs will be invited to attend the Suffolk FA Awards Ceremony later in the year to receive their prizes.