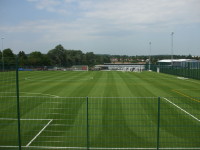 Kestrel Contractors have completed the construction of six hectares of natural grass football pitches and 2 full size artificial 3G turf pitches for Barnet Football Club. Earmarked as a possible host for future England training camps, the £11 million football hub is also set to attract teams scheduled to play at nearby Wembley Stadium that may require state of the art training facilities.

After an exhaustive tendering process back in January 2009, Kestrel were chosen for their dual expertise in constructing both natural and synthetic football pitches.

Working with main contractors The Buckingham Group, the project was complicated by the fact that much of the construction had to be rebuilt to fit in with the new design. It was originally laid out to be a multi sports facility comprising football, tennis and netball, but it was deemed that an exclusive football only project was more financially viable and in line with the club and community requirements.

"Having the involvement of leading industry consultancy experts such as TurfTrax and Surfacing Standards was a great insurance policy" said Joe Boniface of Kestrel. "Having the relevant professionals on site to refer to in the many grey areas that can crop up in construction gives assurances all round that the surfaces not only are built properly, but will also continue to perform long after the project completion, if well maintained".

BBC London's Tom Watt visited the site in the summer of 2009 and was "bowled over" at the extent of the development.

Come 2010, Barnet FC will have a training ground that will be the envy of most Premier League clubs and end the nomadic roaming around Hertfordshire for manager Ian Hendon and his squad.