by External source
in Football and People
on 26 Aug 2017

A former sportsman with dementia has been recognised as Groundsman of the Year for the Southern League. 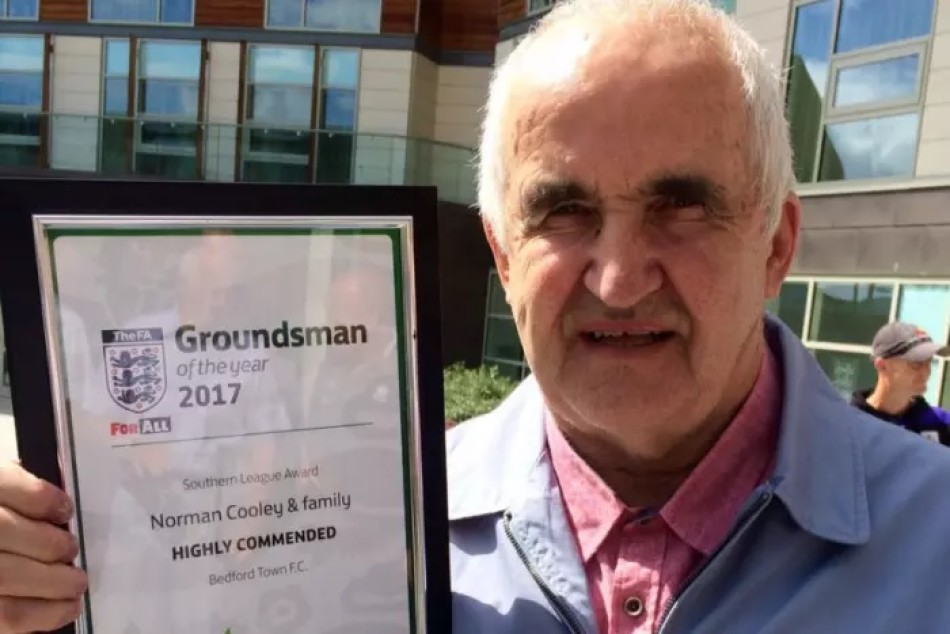 Norman Cooley, 76, is a groundsman at Bedford Town Football Club and this will be his third season looking after the grounds.

Mr Cooley was nominated by the football club and attended a ceremony at England's football training ground at St George's Park.

Alan, his eldest son, said: "Looking after the grounds has been a family effort.

"Dad was diagnosed with dementia three or four years ago so we took the job on to keep him active."

Mr Cooley, his younger son Peter, and Alan head down to the football grounds once a week.

Alan said: "Winning the award, it felt fantastic. It has been a long journey with my dad's disease and this was the perfect thing for him.

"He is very comfortable being in that environment, surrounded by football people and on the pitch, and the award was the icing on the cake. It was a proud family moment."

Mr Cooley played for the Bedford Town 738 times between 1961-77 and later became a groundsman for Bedford school where he spent most of his later life.

Alan said: "It's great for him to go back to the place where he started as a young man playing football.

"Football was his entire life. He worked as a draftsman and they used to let him out of work early just because he played for the club."

"By keeping him active we hope that his decline will be slower.

Mr Cooley's wife, Maureen, looks after him on a daily basis but Alan is glad to help her out and give her a break by taking him to the football grounds.

"Because of his love for both football and cricket, when he was younger he was referred to as the Denis Compton of Bedford."