0 Beekeeping on a golf course 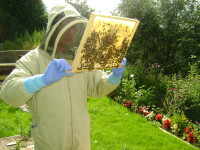 For so many years now, I have been fascinated by the work that other greenkeepers and course managers have been undertaking on their golf courses in creating areas for wildlife, whether it be putting up bird, bat or owl boxes, tree planting schemes or creating wildflower areas and meadows.

I have tried to take every opportunity to learn more about the ecology side of our golf courses, learning from articles published in Greenkeeper International and Pitchcare magazines, bulletin boards, using social media sites and, of course, speaking to other course managers up and down the country.

But, for some reason, the subject of the decline in bees just kept grabbing my attention. So, behind the scenes, I set out to find out more; why are bees in decline and what could greenkeepers do about it, if anything at all?

I started off by reading articles about the successes of Syngenta's Operation Pollinator. I also typed in 'decline of bees' in search engines and this just blew my mind. There is so much written on the subject. 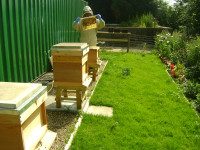 One thing that did grab my attention was a website for the BBKA (British Beekeepers Association) and, from here, I was able to get the contact details of the local association. After speaking with a very helpful lady, she eventually invited me to meet her for a chat. I arrived at an old, closed down school where I was greeted by a lovely lady who said; "the apiary is this way". Apiary?

She proceeded to clothe me in a bee suit. "Why do I need this?" I ask. "The best way to learn is to get involved," she replied. Then she 'kindly' put me in the middle of, not one or two, or even three, but twelve hives. Yes, twelve! I would love to tell you how I felt, but I am afraid it's not printable. What I can tell you is that, after half an hour or so, I was hooked.

But, even though I was reading all these articles about creating areas for wildlife, I really didn't think anyone would be interested in beekeeping. It wasn't until one afternoon, when I was playing golf at Wilmslow Golf Club with my close friend Tim Johnson, the club's senior greenkeeper, that their course manager, Steve Oultram caught up with us as we were walking off the 17th green. Apparently, he was fascinated by what I was doing with the bee hives. 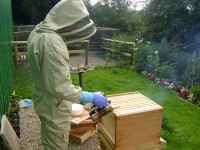 I guess I shouldn't have been surprised, as Steve has been a pioneer within the greenkeeping industry regarding the ecology side of golf which, in turn, has seen his course win a number of environmental awards.

And that's when the penny dropped. Maybe, just maybe, other greenkeepers would be interested in the subject of beekeeping and keeping bees on a golf course. So, using the BIGGA bulletin board and Facebook, I started to share my passion for beekeeping and the honey bee.

The response I had from other greenkeepers was overwhelming. One - Angus Macleod, Director of Golf Courses at The Belfry - invited me down for a tour and to look at the bee hives they already had on their course. So I agreed to pop down and take a look. The hospitality I was shown by Angus and the two greenkeepers who looked after the bees - Terry Jessef and Daniel Clarke - was fantastic and, after breakfast, we were able to sort out his bee hives. You may recall from the Belfry article in the last issue that they, unusually, had two queens in one hive and none in the other. Over the course of the year, I kept in contact with Angus on the progress of the two hives, and I am pleased to report that, not only did both settle down and build strong colonies but, all their hard work was rewarded with 17 kilos of honey for them to extract; well done lads.

I was given a tour of the Brabazon course by Daniel and we talked about other sites where wildflower areas could be created. I was also able to point out to Daniel the important role trees play for pollinating insects. 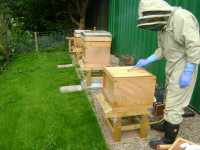 I guess what this shows is that, no matter if you're a 9-hole golf course or a director of a 54-hole complex, we can all do our bit to help the decline in bees and improve the ecology of our golf courses.

So, since becoming Course Manager at Avro Golf Club, I have been working closely with a technical adviser, taking soil samples and analysing the soil in the areas I wish to develop. We came up with many ideas whilst walking the course, some of which have been included in our development programme. The services of wildlife specialist, Howard Wood, have also been employed, and his input has been invaluable. We are also looking into signing up with Operation Pollinator, and this should happen as this magazine hits your mess room.

I can only imagine what some of you are thinking when you see the title 'beekeeping on a golf course'. How in god's green earth did you convince the committee of Avro Golf Club to allow you to keep bees on a golf course? 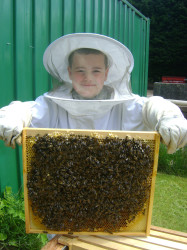 Well, when I sat in front of my committee ready to ask them to not only pay to send me on a beekeeping course, but also explain my plan to build an apiary, I felt like I was about to face a firing squad. I was ready for the committee to come back with all the usual negatives about bees stings, swarms and the fact that between 60,000 to 80,000 bees live in one colony, but, credit to them, not only did they agree on sending me on the beekeeping course, building the apiary and getting the bees, but requested that, after I attended the beekeeping course, I should give a presentation one evening to the members of the club; not just about keeping bees but also the club's future plans for the course with regard to creating wildflower and wildlife areas. I am glad to report that the evening was a great success ... and the bar made a few extra pennies into the bargain.

So, over the next few issues of Pitchcare, myself, Laurence Gale and Steve Oultram will strive to give you a wonderful insight of the world of the honey bee (Apis Mellifera) and the year of a beekeeper, from choosing an apiary to preparing the colony for winter.

It seems we cannot open a magazine, a national newspaper or switch on our TV without something being written or said about the decline of our bees and, for me, the more the better.

It is becoming a well know fact that all bees, whether they be solitary, bumble or honey, are in danger of disappearing from our environment. The loss of natural habitats that have been transformed to motorways, dual carriageways, housing estates, shopping centres, office buildings and industrial estates, to name a few, are major threats to bee populations, whilst farming practices continue to disturb the foraging capabilities of solitaries and bumbles at a rate which gives them little chance of re-establishment.

The Honey bee is under attack from the Varroa Mite (Varroa destructor) and it is the care provided by beekeepers that is keeping colonies alive. Most feral honey bee colonies have died out as a result of this disease. It is estimated that, should a colony establish itself in the wild, it will only last approximately three years before being wiped out.

Bees are essential pollinators, and make a very important contribution to food production globally. It is estimated at £200 million in the UK and £6 billion in Europe.

In the UK, approximately seventy crops are dependent on, or benefit from, visits from bees. In addition, bees pollinate the flowers of many plants which become part of the feed of farm animals, so you can see that bees even have an effect on the meat we eat and the milk we drink.
In spring, most other pollinators exist in very small numbers, whereas honey bees over-winter as a large colony and, therefore, can pollinate in force. They are able to recruit other honey bees to forage the same crop by means of a bee dance.

It is important to remember that not all crops and wildflowers are pollinated by the honey bee. The bumble bee also has a vital role in pollinating wildflowers, and our food crops, such as potatoes, tomatoes and soft fruits such as strawberries. This is due to their size, shape and ability to vibrate vigorously, making them more effective at pollinating certain crops.

The Importance of Beekeeping

The vast majority of beekeepers in the UK do it as a hobby. However, some of these amateur beekeepers are amongst the most knowledgeable and skilled in the world and, because they are not dependant on the bees for their living, are not under any pressure to over exploit them.

Since the arrival of the Varroa mite in Europe and North-America, feral colonies have almost disappeared. Beekeepers are, therefore, essential to maintain stocks of bees and provide a pollination service to the agricultural industry and the rest of the countryside.

Beekeepers provides honey for humans. This is a natural source of carbohydrates (energy) which is valuable, and which imposes no burden on the environment - unlike sugar production. Local honey is sought after. If you have surplus, you can offset some of the costs of beekeeping by selling some. Last year's crop from my apiary at Avro Golf Club sold out in three days.