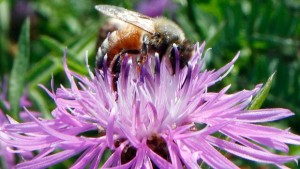 A raft of new research published over the summer is posing ever more serious questions about whether neonicotinoids, the most common insecticides in the world, are affecting birds and bees more widely than previously thought. The research is looking into more subtle, long-term effects from the insecticides - rather than instant direct kills - that may still harm bird and bee populations.

Through a four-week study on bumblebees, Nigel Raine, an expert in pollinator conservation at the University of Guelph, found that the neonicotinoids, which are neurotoxins, affect bumblebees' ability to find and collect food.

"When the neonicotinoid-treated bees go out of the colony for the first time to look for flowers, something about their exposure to that pesticide means that they're less able to collect as much pollen as the bees that are untreated," he told the CBC Radio program Quirks & Quarks.

"And that impact only gets worse over time, because the untreated bees improve their performance and their ability."

In turn, that leads to smaller colonies, which in turn means that fewer queens are produced, a phenomenon that decreases the number of new bumblebee colonies.

Pollinators, including honeybees and wild pollinators, are in decline around the world, Dr. Raine said, adding that a host of factors is thought to be responsible.

Pierre Petelle, vice-president of chemistry at CropLife Canada, told Quirks & Quarks that the industry's studies suggest that neonicotinoids are not one of them.

The insecticides - known as "neonics" for short - are responsible for some bee deaths in Ontario and Quebec in 2012, after dust kicked up from their application reached some colonies.