Stourbridge Golf Club was formed in 1892 - approximately! The first surviving minutes of a committee meeting on 22nd September 1894 refer to the club "having been running for around two years".

Back then it was a nine-hole course built on the old Pedmore Racecourse. It was subsequently extended to 18 holes over 93 acres and, at one time, was included in the Guinness Book of Records as being the course with "the longest yardage over the smallest acreage".

Like many long established parkland courses they have seen many changes over the years, more so in the last twenty with the advancement of aeration and drainage techniques, along with the development of mowing technologies and the added pressure of providing all year round golf.

Craig has over twenty years experience in the industry having previously worked at three other clubs; Harborne, Isle of Purbeck and Handsworth. It was Craig's, old English teacher who introduced him to the world of golf, getting him an interview for a YTS post at Harborne.

Craig has attained NVQ level 2 and is currently undertaking a distance learning HNC qualification in Golf Course Management from Elmwood College. He also has PA1, 2 and 6a certificates.

His deputy is Ian Cureton, and there are three other permanent staff and two part-time bunker rakers.

He reports to Bob Grindley, Chairman of the Greens, who has held the post for six years. They meet on a regular basis to discuss issues. The club currently has a healthy membership of around 600 who expect all year round golf.

The course could be described as an inland links course, as most of the underlying soil is sandy, which promotes fine fescues. It is free draining allowing rainfall to soak easily through to the underlying layers. Its loamy content consists of sand, silt and clay sized particles. Recent soil analysis on greens indicated content 5 % clay (<0.002mm), 15% silt (0.063-0.002mm) and 80% sand (2.0-0.63mm). The texture is loamy with the feel of more sand grains, and is of a low natural fertility with a low soil Ph.

The acidic nature of the soil encourages heathland habitats with plantations of Heather (Erica) and Hairbell (Campanula rotundifolia) happily thriving.

Craig is keen on improving presentation to show the course in its best light, along with delivering consistent putting surfaces. Since his arrival he has added approaches to the greens. The greens themselves are hand mown through the winter months to reduce compaction and then vibrating rollers which helps reduce the pressure to cut them too low. Craig has also introduced new verticutting and feeding regimes along with tweaking the topdressing and overseeding programmes, resulting in a little and often approach to managing the course.

Greens are cut at 6mm in the winter, 4mm in the summer and 3mm for tournaments. Toro 3250D Greensmaster triples are used during the growing season and Dennis pedestrians at other times.

A number of permanent rough grass areas are cut, scarified and collected to improve sward quality to encourage the finer bents and fescues to establish. The cut and collect operations are undertaken in August and, if required, a follow up cut is undertaken in March.

In spring, the greens are vertidrained, lightly topdressed with a 70/30 sand/soil mix. applying around thirty tonnes.

In the autumn they are hollow cored and gradened to a depth of 25mm and topdressed with a 70/30 soil/sand mix, a total of thirty tonnes applied. They are then oversown with 100kg of pure bent grasses per year.

A programme of slitting is carried out on the greens in between spring and autumn renovations, with further applications of topdressing. Craig applies around one hundred tonnes of topdressing to the greens each year.

Tees are renovated twice a year - spring and autumn - using the graden and overseeded with dwarf rye grasses. They are also slit aerated at various times throughout the year.

Fairways are scarified in spring and autumn, with a slitting programme carried out when conditions allow. Last year, Craig introduced veridraining of the fairways.

The aim is to increase the finer grasses and reduce poa populations by controlling the feeding. A number of seaweed applications are applied to help balance the feeding regimes. Wetting agents (h2pro) are used on a monthly basis.

Pest and disease controls are down to the extent of the problem and how quick early symptoms are recognised.

Fusarium was a significant problem on the greens in the past, due to high thatch content present some years ago. The combination of increased aeration, scarification and verticuting has reduced the need to spray fungicides so often.

Yorkshire fog is undesirable as it is pale in colour, with unsightly disfiguring patches and hairy leaves and sheaths. This species also affects the speed of the greens. Craig has adopted a regular programme of verticutting, mechanical treatment i.e slashing with a knife, positioning pins near it with the aim to thin it out and promote desirable species within the sward.

Craig has been pleased with the progress made so far, but says that even more will be achieved over the next couple of years.

The course has also had its fair share of badger and rabbit damage, particularly when the badgers are feeding on chafer grubs.

The proposed winter work was put on hold during the cold spell. Snow and ice kept the course closed for several weeks but, during that time, he took the opportunity to remove lower branches from trees, vertidrain the fairways for the first time and replace worn sprinklers on tees. 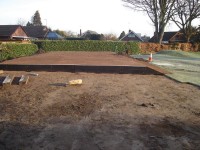 Craig is keen to meet the Midlands Gingerbread Men in the coming months, as he recognises the importance of networking with his fellow greenkeepers and looking at ways of improving his course.

However, although he believes their strategies are fundamental in producing a course to the highest level, he says that it is important to remember that we are here to provide a service to our customers and, therefore, a balance is required. But, he is keen to find out more.

Craig ensures he and his staff are kept up to speed with the latest industry news by attending relevant conferences, trade shows and reading trade magazines. He considers that good relationships with sales reps is one way this can be achieved, citing John Handley of ALS and Kevin Pugh of Turner Groundscare as being very supportive since his appointment. Kevin will be pleased to hear that he is looking to purchase a new vertidrain and spinning disc topdresser in the next couple of years!

The club also employ the services of the STRI to advise on course management, with recent visits from Richard Stuttard regarding ecology and environmental issues. These have been centred on tree, gorse, bracken, heather and grassland management regimes, with the aim of improving the aesthetics and biodiversity of the natural habitats.