5 Before the Test, the challenge - behind the scenes with the Trent Bridge groundsmen 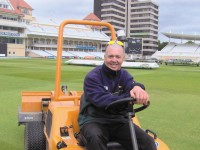 And he'd be the first to admit that, on Monday, it needed some work.

As Trent Bridge's head groundsman Steve has more responsibilities than he has lawnmowers. And he's got a lot of lawnmowers.

But the main responsibility sits out in the middle of the pitch.


Standing in the middle of a ground that will soon fill with fans, he points at a wicket. "If that ain't right," he says, "there's no point spending millions on the stands."

Words like "about" and "roughly" do not work when talking about wicket preparation. Grass on the wicket a millimetre too long? Watered it just a bit less than normal? When exactly did you put down those grass clippings? Everything matters.

Take it a shade too far in one direction and the sound you'll hear will be the constant clatter of wickets and palms slapping against foreheads in the boardroom as a five-day Test winds up in three or four.

Take it a shade too far in the other direction and you'll get your five days, all right. Five days of placid run-scoring leading to the inevitable draw as you get shredded in the papers for preparing the sort of wicket that's leading to Test cricket's often-predicted demise.

Steve, head groundsman since 1997, did the job for 18 years at Derby before that. He knows what's at stake.

"You put more pressure on yourself than the club does," he says.

The Test wicket gets used once a year.

Steve can choose between 11 wickets for other matches. But, because of camera angles, for televised matches you can only use the wickets smack in the centre of the pitch.

A fortnight ago, Steve's Test wicket looked perfect. But the schedule's funny this year.

Usually you'll have a One Day International (ODI) in, say, early June and then a Test in August. This year, Trent Bridge's one Test comes just three weeks after the ground's one ODI - and the Test and ODI wickets sit right next to each other.

There's also been a busy June and July of domestic cricket. Some of that has been televised, which means more action near the middle, and the Test wicket. And normally, he'd get at least ten fixture-free days before a Test. Would have this year, too, except that Notts had to go and qualify for a T20 quarterfinal at home.

So, while not a ball has been bowled in anger on the Test wicket, there's been plenty of traffic around it.

Steve will be able to explain the origins of every scar on the wicket. Here's a bald, stomped patch from "Dirk Nannes' bloody follow-through". There's the aftermath of Luke Fletcher's over-exuberant fielding. He shakes his head and says something he'll repeat more than once during the day: "It looks more like a six-yard box."

8.15am: Steve's already been working for nearly an hour when he turns a key and the Hover Cover inflates and rises to life. It's a massive super-tarpaulin - when inflated, it can be moved by three men pushing and two steering - that sits over the wicket, two large auxiliaries rolling out from either side to protect the other wickets.

Tonight's wicket revealed, Steve and several members of the team start preparing it for its close-up. First, they brush it to bring the grass up. Then Steve brings out a special small mower and takes down the bristly brownish grass even more. It's starting the day at an entirely unacceptable six millimetres. By match time, it'll be four.

But it's still early, and anything could completely change the day's plans. Steve looks up at a darkening sky. A few small raindrops fall.

9.12: Wappy handles breakfast. Actually, if we're being formal, Chris Hallam's unofficial responsibilities include the preparation of breakfast for the groundsmen. But if you call up Trent Bridge and asked for "Chris Hallam", you'll likely be met with confused silence.

Tip: call and ask for Wappy or some variation - Wap, Waps, maybe Wappo. You'll be put straight through.

Chris was christened Wappy not long after arriving at Trent Bridge, and the nickname stuck. Another thing that's stuck is Wappy's role as breakfast chef. The lads all put in for bacon and baguettes from the Co-op, and Wappy mans the grill that Steve calls the George Formby.

"I let one of the other lads cook the other week," says Wappy, cutting a baguette with a Stanley knife. "That was a disaster."

Wappy prepares the feast in the groundsmen's office, a low-roofed room under the Larwood and Voce Stand. In the office they've got the essentials - a TV, a dartboard, a sink and a microwave. Two computers get used regularly for weather updates and fantasy football (from one, they can also control the 90 sprinklers under the pitch). Today, the weather website shows clouds rolling over the East Midlands. And it's not long before occasional raindrops turn into something steadier.

10.52: Steve rotates between the weather website and regular reports from groundsmen sticking their heads out the office door.

"Is it still raining, Bill?" he asks. "Yeah, it's just that drizzle," Richard Marshall answers. "Mizzle," corrects Gary Barwell. These distinctions matter in this line of work.

Director of cricket Mick Newell calls. He'd wanted a nets session for 11, but that's not going to happen now. Steve says the rain's supposed to be clearing and he'll have the nets up in an hour.

He hangs up and asks again if it's still raining.

12.10: The rains have stopped, but the sky remains dark. Steve looks over that night's wicket and decides it's time to brush and cut it one more time. On the other side of the field, Stuart Broad is pretending to bowl for a Maxim photo shoot.

1.26: The Sky boys have swarmed all over the pitch, setting up the special hoardings and popping off the turf lids that hide their in-pitch pits of wires and cables and gizmos.

3.45: Steve's phone rings. It's the boss, chief executive Derek Brewer. "We've had a couple of spells of rain," Steve tells him. But, he says, "the pitch is all right".

But don't worry, by the time anybody has to use it, it'll be fine.

4.15: After polishing off fish and chips with mushy peas and an apple pie, courtesy of the Derek Randall Suite kitchen, it's back out on to the pitch for final preparations. They roll up the tarpaulins. During the match, the wicket'll be covered with coconut matting.

5.11: Sussex players wander on to the pitch. Two stand over the wicket and stare into the ground like they've lost contact lenses. Steve laughs.

"What'll happen now is the opposition will come out and they'll look at the wicket like it's a nuclear bomb," he says.

7.29: During the match, Steve and the lads sit in their usual spot against the Hover Cover on the grass between the William Clarke Stand and the boundary. Their only big moment comes when Dirk Nannes wants sawdust for his run-up. The sawdust is on the other side of the ground so, as play grinds to an awkward halt, Steve sends all his charges off sprinting.

Steve laughs and shakes his head. Sky cameras have caught somebody - someone from the hoardings-erecting team - leaning against the Hover Cover and eating his chip dinner. A hard day's work, and everybody at home will think they're sat around eating chips when they should be fetching sawdust.

10.16: The match over, Steve and the lads sweep the wicket and roll up the coconut mat. Then they start soaking the wicket they've just used.

It'll be more than another hour - towards midnight - before Steve and the lads leave. By 7.30am, they'll be back. It's almost been a 16-hour day, but Steve doesn't sound tired. As the tarp goes back on the Test wicket - his professional reputation - he smiles.