0 Behind the Grass at Eden Park

For Eden Park groundsman Joe Hollier, work means much more than just keeping the grass at the right length. While most people think that's all he does with his time, there are stacks of other tasks that he has to get perfect before every game.

And with the redevelopment of Eden Park for the Rugby World Cup in 2011 there is certainly no time for rest. While Eden Park continues to expand its new stands, international cricket will continue to be played on the main ground (early next year). 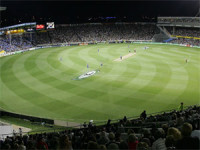 But in the meantime the outer ground, home of Auckland domestic cricket, is out of commission until 2012. That means everything has been relocated to Colin Maiden Park in East Tamaki - including the ground staff.

Starting almost from scratch, Hollier and the other ground staff have had to prepare a new cricket block before the summer season begins. Splitting time between the two grounds leaves no time for complacency. During regular times at Eden Park, a huge amount of work goes into getting the ground ready for rugby and cricket.

For rugby the task is fairly simple but things need to be a lot more precise when cricket gets underway. "A lot of work goes into preparing a cricket wicket," Hollier told tvnz.co.nz. "It's a pretty full-on balance of watering, rolling and mowing. We start about 10 days out from a game and it's pretty intensive from there. "There's always pressure to have the best wicket possible. We are supposed to be the top ground in the country so there are always high expectations from players, officials and fans."

As New Zealand sports move more and more into the professional era, the demands for a flawless playing surface are intensifying. And that can complicate things during the season cross-over of winter and summer codes. "Having rugby and cricket on at the same time can make things difficult because we only have a small window to completely change the set-up of the surface," Hollier said.

"Coaches just won't accept any half measures these days. Rugby never used to mind playing on a cricket block but now it's so professional that players have the potential to be injured on them." "It would be near impossible to play both without our drop-in cricket pitches."

After the hard slog of preparing a world-class ground, the perks of the job aren't too bad either.

"Once the games are underway we get to watch live sport at the highest level. Just knowing that all eyes are on your ground and you've poured your hard work into it is pretty special.

"People think it's an easy job but it's a lot more than a home lawn out there. And I have no doubt it looks a lot better than anyone's home lawn as well!"
Source & More: tvnz.co.nz