10 Behind the scenes at Gillingham

Behind the scenes at Gillingham 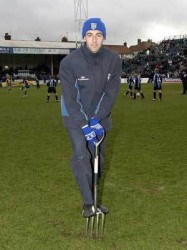 Still, the opportunity for Jon to progress in his career came up at Gillingham, and the lad from Gravesend jumped at the chance. Jon said: "I heard about the job through a former coach at Tottenham - Theo Foley. I came down to have a look around and I was impressed with what I saw. It's been a great joy to work at Tottenham but I thought it was time to move on and become my own boss."

Jon has already noticed some big differences between the two clubs. He explained, "The football and the stadium obviously and, at Tottenham, you're producing a pitch for world-class players week in week out. The stadium is huge, 36,000 seater, but I actually do prefer first division football because I believe there is more heart and more passion in it. I think the players earn their money instead of just going out there for their £30,000 a week. They earn their money in this division and it's good football. It's great to come to a club like Gillingham and I just want to do the best for them."

The main challenge for Jon at the moment is to keep manager Andy Hessenthaler on his side as the pitch is obviously very important to him and the team. "There is lots to do - keeping the manager happy to start with, and keeping grass on the pitch. The biggest nightmare for a Groundsman is losing a game in the winter through your own fault. You can't really do a lot about heavy rain but, if there was something you could have done, it's a bit gutting that you have lost the game due to you. But, other than that, it's all about producing the best pitch that you can."

He added: "Pretty much Monday to Friday is all about cutting and watering. I like to cut out an 18 feet pattern like a chessboard. It's easy to work with, with all machinery. I string out every line acrossways and lengthways. Sometimes, especially during the growing season, I might cut on the morning of the match because of it growing over night. Marking out is also done on the morning of the match."

Jon always had the dream of maintaining a professional football pitch when he realized he wasn't going to make it as a player. He said: "It all started at a young age, about nine or ten. I always used to like grabbing the mower out of the shed after school and striping up the front garden and listening to the neighbours say 'what a pitch of grass'. So, at a young age I wanted to become a top Groundsman at a top Premiership club just looking after their pitch. I thought that it was the next best thing to being a player if you couldn't make it. 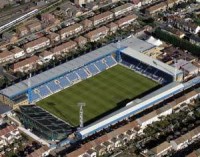 I left school and went straight to collage and studied for my BTec first diploma in horticulture, which I got. I then started work at Dartford Golf course. I was there until I saw the Tottenham job advertised. I went to an interview and was then lucky enough to get the job."

On the footballing front Jon is excited about working for a club which seems to be making rapid progress. " I think that they are on the way up," he said. "To be honest I'm a massive Charlton fan and I see a lot in Gillingham that Charlton have done. I think they are slowly on the way up and, give it three to four years, I would like to think they'd be in the Premiership. They have come from having a small stadium to one that has now been built up. Danny Spiller has really caught my eye. He seems to really work hard and I think he was the man of the match in the game at Watford. He's come up from the youth and he's a good player. Obviously, there's Rod Wallace and Marlon King as well."

Jon's ultimate aim is for Gillingham to win trophies for their football and an award for the pitch." I would like the pitch to be recognized," he said. "Two years ago at Tottenham we did major work on the pitch to the tune of half a million pounds and last year I felt that it deserved pitch of the season. Obviously I have got the experience and knowledge of the industry to be able to hopefully pick up the award here for Division One."