1 Behind the scenes at the Wimbledon Championships 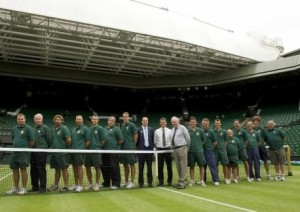 If Andy Murray becomes the Gentlemen's Singles champion on Centre Court this year the images from the presentation ceremony will be beamed around the world.

Most will focus on the player and his trophy but on the periphery of those images expect to catch a glimpse of Will Brierley from Burnley.

Last August when Murray acknowledged the adulation with Olympic medals around his neck, Brierley could be seen on photos and a year earlier he was also there, just over Novak Djokovic's left shoulder.

That's just the way it is and the way he likes it to be. Brierley is usually on the fringes of the main action at Wimbledon but do not be deceived; his influence is significant.

He is senior groundsman for The Championships' courts and one of the planet's iconic sporting events is entirely dependent on the work of Brierley and the team, led by head groundsman Neil Stubley.

They tend only to be noticed when they line up at the presentations to form a guard of honour for the champion but without them the show simply can't go on.

Wimbledon is the only grand slam tournament still played on grass after the U.S. and Australian Opens switched to less labour intensive hard courts in 1978 and 1987 respectively. So the quality of the playing surfaces is crucial to its ongoing success.

The groundstaff team (Brierley is furthest to the left) of 14 full timers, two mechanics and around 12 summer temps ensure the 41 grass courts (19 Championships, 22 practice), eight hard courts, two acrylic and five indoor are kept in pristine condition, both for the members of The All England Lawn Tennis Club and for the elite tennis talent that visits each June. 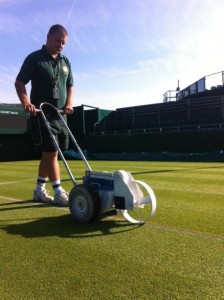 That the 27-year-old Brierley should hold such an important position at such a revered institution would have been difficult to predict ten years ago.

At that stage he was a teenager living at home in Burnley. He was a keen follower of Liverpool Football Club and Lancashire cricket but ambivalent about his future.

He dabbled in house removals but with little conviction. His mum issued a gentle ultimatum: go to college or start paying rent. Brierley opted for college, where his devotion to Liverpool encouraged him to take a two year course - a National Diploma in Sports Turf.

He liked the idea of working at Anfield.

He said: "I thought I'll get on the groundstaff and watch the games for free.

But for his work experience at the end of his second year he was offered the opportunity to spend six months down south at Wimbledon. At that stage he had hardly watched tennis on television, let alone live, so he might as well have landed on an alien planet when he first set foot in London's opulent SW19.

What were his first impressions when, wide-eyed and awestruck, he walked through the gates at Wimbledon?

He said: "I just thought this is massive. I was blown away with how smart the site looked and the immaculate courts.

"It was so impressive and a defining moment in my life. Fortunately he also impressed with his hard work and good cheer and was invited to fill a permanent vacancy a year later. Ambivalent no longer he's now married, lives in the area - cycling six miles into work each day - and is quite open in his ambition to become Head Groundsman.

"Ever since that first morning I've always wanted to do well and progress. I love it here."

Of course he feels more at ease in his surroundings nowadays, which is not surprising as he spends as much time there as at home.

Certainly he is well qualified to convey both the real Wimbledon and the art of court management - and does so via a twitter account and blogs on the website.

He lives and breathes this place, 24/7 and knows - quite literally - every blade of grass on its manicured lawns and every nook and cranny across the 42 acres.

The essence of sporting venues can often be found behind the scenes, away from public access. Did you know, for instance, that there is an underground tunnel at Wimbledon that allows the dignitaries, officials and players to move around the packed grounds quickly during the tournament?

Brierley's own favourite 'nook and cranny' is his tiny, windowless base next to Court One. During The Championships, once play begins, Brierley is either courtside - often gazing skywards to assess approaching clouds for rain - or in there.

It is a homely room, filled with four large, well-worn and comfortable armchairs labelled after the groundsmen who inhabit them: Will himself, Richard, Karl and Ben.

There is a TV on the wall. Primed, they can be up, out and on court within seconds. It's a sanctuary warmed with the kinship and banter that Brierley values so much.

He said: "We have a close-knit group here. I don't remember any serious animosity in seven years. It just seems that everybody gets on."

Today, though, his colleagues go about their duties outside in the sunshine as Brierley sits in the room and, firstly, explains why a straightforward Northern lad has become such a genuine convert to all things Wimbledon.

Certainly he disagrees with critics who label it too corporate, too establishment, too exclusive.

He said: "No, not all. I love the tradition here: the grass courts, players in tennis whites, the lack of advertising, the dark green and purple, the strawberries and cream, the Pimms. It's just a very British sense of sport and people turn up expecting that.

"We need to keep that sense of Wimbledon because that's part of why there is so much worldwide interest. This is still the slam that the players want to win.

"What I see is a genuine desire to put on the best for players, fans and media. Yes, the Club's been going for over 125 years but it's constantly evolving.

"We've now got a roof over the Centre Court, Hawk-Eye electronic line calling and innovative plans for the future.

"I suppose it compares with Lords for an Ashes test or Wembley for the FA Cup Final but, for me, because Wimbledon is spread over two weeks, with the excitement building up to the final weekend, it just has a little more to offer.

"That's why even during the recession we've had record number of visitors and spectators."

That trend will certainly continue this summer as Andy Murray seeks to make history. And Brierley thinks the courts will be better than ever come Monday June 24 when the action starts.

The 2012 Olympics delayed the annual renovation by a few weeks last August but since then Brierley and the team have followed a time-tested ritual to prepare the best possible surfaces. Nothing is left to chance. It is precision engineering.

Brierley explains: "The courts were flooded on the evening of Olympic finals because they were so compacted by all the foot traffic and that makes it difficult to work with. We got a day off and then the renovation started.

"This is always the critical time of year for us. We took off the soil and grass and re-seeded. Then, six weeks later, we added top dressing and left the seed and grass to work its way in and settle.

"During the winter we kept ticking over. As temperatures dropped with frost and snow we didn't cut much but used preventative sprays against disease, worms and bugs.

"Then once the frosts went we started cutting, spraying and adding fertilizer. From late March we really geared up.

"We lowered the grass height, scarified to take out thatch and weeds and gave the courts a roll.

"It's funny. People think we are always rolling the courts like a cricket pitch but, in fact, they only get two rolls all year.

"Because of their clay base they are naturally quite firm and if they are too compact it impacts on the quality of the grass growth."

In the third weekend in May the grass courts were opened for members' tournaments, though the Centre Court is only used during The Championships.

Thereafter the focus has been on fine tuning and maintenance: cutting (up to three times a week), fertilisation, watering and spraying for disease.

The aim, come day one of The Championships, is an 8mm stubble of grass and a consistent pace and bounce across all courts.

Nowadays 100 per cent perennial ryegrass is used on all courts (up until 2001 it used to be a 70:30 mix of Rye and Creeping Red Fescue) and this has improved the durability, strength and compaction of the turf and the soil below.

It means that the courts stay in good shape and also encourages the ball to bounce a bit higher.

Critically, this helps when trying to return serves and has encouraged longer rallies. So is all on track for Wimbledon 2013? Brierley thinks so.

The wet winter allayed fears of a hosepipe ban and he thinks that the normal dangers are also well covered.

See the rest of the article on the following link:-Your Local Guardian