Harry Vardon was responsible for putting Ganton Golf Club 'on the map'. It is one of only three courses in the UK to have hosted the Ryder, Walker and Curtis Cups

Laurence Gale MSc talked to Head Greenkeeper Philip Baldock about looking after this inland links course with over 115 bunkers and acres of gorse bushes.

Being bunkered is par for the course at Ganton Golf Club, near Scarborough in north Yorkshire. The course has 115 revetted bunkers that are a test for golfers of all levels.

The course was originally designed in 1891 by Tom Chisholm of St. Andrews, assisted by Robert Bird, the club professional at the time. Subsequent alterations followed over the ensuing years with inputs from, amongst others, British and American Open champion, Harry Vardon Vardon was responsible for putting Ganton on the map. The club have an impressive display of Harry Vardon memorabilia - clubs, bags and balls - which can be seen in a special oak case in the clubhouse.

Situated in the Vale of Pickering, the inland links course offers some breathtaking views, especially in the spring and autumn, with a splendid backdrop of heather, fescue grasses and gorse in full flower.

However, it is the layout of the course, with its strategic bunker placements and punishing gorse that have earned the course its reputation. It is one of only three courses in the UK that has held the Ryder, Walker and Curtis Cups. Many of the world's best golfers have been tested on this challenging inland links course.

The course is open every day of the year, closing only when snow is deeper than a golf ball; it is a traditional members club with around 300 members who, together with visitors, complete between 30,000 and 35,000 rounds of golf a year. 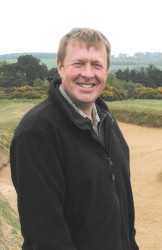 Head Greenkeeper, Philip Baldock, has been in charge for nine years, and has a staffing compliment of six greenkeepers plus a part-time warrener and gardener who help keep the course in prime condition throughout the year.

Ganton is set in 75 hectares of undulating, North Yorkshire countryside. Less than a third of the area is managed as fine turf, predominantly fescue/bent with small amounts of annual meadow-grass and some Yorkshire fog in the roughs. The remainder is native rough, gorse or predominantly pine woodland. There are small copses of deciduous trees in the areas of the course that have a slightly higher organic matter content in the soil.

Philip endeavours to keep the course maintained with sustainability in mind, trying at all times to reduce the amounts of pesticides, fertilisers and water resources being used. On average only 2.5 hectares of the total area are ever fertilised.

In fact, this year Philip managed to reduce his fertiliser programme even further, to less than 1.4 hectares, mainly on tees, walkways and wear areas. Greens have not been fertilised since April 2006, when they received 4 g/m2 ammonium sulphate in a seaweed carrier.

Greens are top-dressed monthly in season at 1-1.5kg/m2 with a 70:30 dressing. All other soils and sand used on the course are sourced from on site.
There is a healthy recycling programme on going; all the grass clippings are composted and mixed with local sand and soil deposits which, after a period of time, are used in bunker renovation works.

The course has 115 bunkers, all revetted. Those facing south or west last between 3 and 5 years before needing to be rebuilt; those facing north or east may last up to 10 years. The club has its own turf nursery, which is maintained to produce all the turf requirements for the annual renovation works. Not only is this more cost effective, but it means they have turf on the same soil type which is perfectly suited to its environment. In the main, the turf is lifted and laid on the same day.

Gorse management is a near constant feature in Philip's winter renovation programmes. The work required varies from hand pruning to wholesale removal using large all-terrain forklift type vehicles. He also has a heavy duty flail to limit the spread of this weed/hazard/feature.

Automated irrigation systems are available on all tees, greens and surrounds, however they are used sparingly. Wetting agents are applied to greens on a monthly basis, and on tees and aprons once or twice a year. The water is sourced from the club's own recently constructed spring-fed reservoirs that are licenced to supply 20,000,000 gallons per year, although less than half of this has evey been used.

Little or no water is applied to the fairways. Keeping water to a minimum helps sustain the finer grasses (bents/fescues). Philip and the club are keen to maintain the course as a traditional inland links with firm and fast fairways.

The greens are built from the native sandy soil, with many having changed very little over the last 100 years. They are predominantly on the large side, with many over 500m2, undulating and very challenging.

The approach to the greens maintenance is minimal disturbance, with the aim of promoting and sustaining the fescues. Verticutting is undertaken once a month only. Dragmatting is carried out on a regular basis (2-3 times a week when suitable) to stand the grass up prior to mowing. Brushing or grooming is used at other times to help achieve a good cut, but not on perimeters of greens.

Green surrounds are tmaintained similarly to greens with their own verticutting and topdressing programmes. Tees are verticut in early spring after moss control and prior to fertilisation.

Aeration on greens is limited to sarel rolling on a regular basis in season, this is supplemented by annual micro hollow tining in September/October coupled with overseeding. 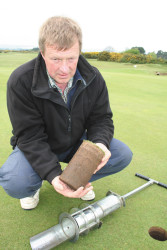 Greens, tees and fairways are vertidrained on a three year rolling programme. This sounds low compared with modern practices but, due to the sandy soil not compacting as readily as some, is adequate for the site. Vertidraining is used primarily to provide ingress for water and promote deeper rooting. Root depth on greens is between 125 -200mm, with some going deeper.

None of the greens have any primary or secondary drainage systems installed, and rely totally on the natural soil free draining capacity. A soil core taken on the green clearly showed no root breaks or black layering, with roots well down beyond 200mm. Clear evidence of the good management practices being undertaken.

Fungicide treatments are rare. In fact, Philip has not sprayed for fusarium in the last 14 years, at either Ganton, or his previous Club, Royal Portrush. This is partly because of the grass species and partly due to the nature of the sites and the way they are managed.

Philip has, and will use if required, an iron or Bordeaux mixture as a preventative measure when weather conditions make disease outbreaks more likely. Their main disease problem is fairy rings.

Philip has seen a noticeable increase in leatherjackets in recent years, with occasional chafer problems in the rough. He attributes this to the wetter, milder winters. Treatments have been gradually extended to include fairways due to the damage sustained if left untreated.

Mowing heights are intended to provide firm and fast surfaces without overstressing the finer grasses. Greens are kept at 4.5mm in summer and up to 6mm in winter. Last winter was very mild with no snow and very little frost, which enabled the greens to be maintained at 5.5mm with no ill effects.

Daily mowing is the norm in the summer, with occasional double cutting or rolling if conditions and staff resources allow. The average greens speed throughout the summer are between 9' 2" and 9' 4". Adding a second cut, or a roll, will increase this by up to a foot if weather conditions are favourable. Given good conditions, extra pedestrian mowing and rolling at the latter end of the main season, it is possible to take greens speed over 12' for a limited period.

Tees design has changed very little over the years, they are relatively small areas, but beautifully manicured. They do not impose themselves on the natural native landscape, but do the job of providing the golfer with a chance to hit the ball cleanly.

The native rough is cut annually, after the seed has set. This is done by a local farmer, who then bales and removes the cut material. This is done to prevent the build up of nutrients, which would alter the species composition in these areas.

There is no doubt that Ganton has a different approach from many others that I witness on my travels. There was no wall to wall mowing, manicuring, herbicide or feeding regimes in practice. And very little in the way of golf furniture that usually clutters up a lot of modern courses.
However, it did not lack quality when it came to playability. The greens, tees and approaches were in fantastic condition. It doesn't have to look green to be good, was the message that Philip wanted me to go away with.

Philip and his staff are proving that sustainable golf can be managed with fewer inputs of chemicals and fertilisers. It does not happen overnight, but when you have mastered the art of managing the soils and environment you inherit. Having a committed and educated greens staff, and the backing and understanding of your greens committee goes a long way to achieving these goals.