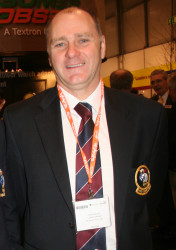 BIGGA's 2008 Chairman, Kenny MacKay, has one of the biggest jobs in greenkeeping. As Director of Golf Courses & Grounds at The Belfry, he is in charge of three 18 hole course, including the famous Brabazon which has hosted four Ryder Cups more than any other course, and a large team of greenkeepers, irrigation specialists, mechanics and gardeners.

Kenny, originally from Glasgow, was previously Course Manager at Marriott Forest of Arden and Marriott Hanbury Manor having started his career at The London Club and he has prepared golf courses for many European Tour events at three different venues.

"I am extremely proud to be BIGGA National Chairman and I will work hard during my year of office to promote the Association as well and as widely as I can," said Kenny.

His ambition during the year is to increase membership and he feels there is scope, with some new membership categories to add to the 6500 members BIGGA currently has.

"I do believe that we can make major strides in membership numbers over the next few years and I will be doing what I can to make that happen," he said.