by Ella Boyden
in Machinery & Mechanics, Industry News, and Golf
on 13 May 2016

0 Belton Park opt for ‘orange’ on their tees, greens and fairways 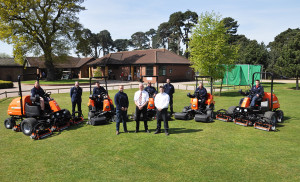 Belton Park Golf Club, located in Grantham, Lincolnshire, have taken delivery of three Jacobsen Eclipse 322 hybrid mowers and two LF570 fairway mowers. The club was previously served by a competitor brand, but it has since chosen Jacobsen to maintain their course. The fleet of vehicles were delivered to the golf club by their local Ransomes Jacobsen dealer, Burdens Group.

One Eclipse 322 was purchased for use on the tees at the 27-hole club, and the other two will be used on the greens. The tees machine is three-wheel drive and fitted with 7-blade cutting units, while the greens machines are fitted with 11-blade cutting units and Jacobsen's bi-directional groomers, which help stand up the grass leaf for improved cutting performance.

Lee Carratt has been part of the greenkeeping team at Belton Park for 17 years, joining straight from school after a spell of work experience and has been head greenkeeper for the past three years. Lee is in charge of a team of nine including one dedicated mechanic and one seasonal greenkeeper.

Commenting on the purchase of the Jacobsen fleet he said, "I had the machines on demo for four days prior to making a purchasing decision and during that time, I was really impressed with the quality of cut that both the LF570 and the Eclipse 322s produced. On the Eclipse, one thing that I found particularly useful was being able to control and lock in mow and transport speeds when the machines were out on the course. The electrical power system, in general, is a huge advantage as it is fuel-saving; there's minimal noise and oil leaks are a thing of the past. 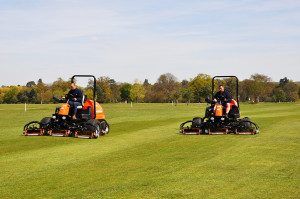 "The LF570's are equally very good machines. They are extremely comfortable to work on and offer us a lot of flexibility. Between the two machines we have purchased, they're able to cut 13 and 14 fairways respectively, using just five litres of fuel. When you do the sums, it's astounding at how much money you're able to save which will allow us to invest these savings into other projects around the course.

"We have had a brilliant working relationship with Burdens for more than 10 years now and along with Harvey Doughty, technical sales manager at Jacobsen, we have been able to tailor the package to suit our requirements. It's refreshing to deal with company representatives with a real depth of technical knowledge. I also have peace of mind that Burdens will provide us with the excellent level of after sales support that we have come to expect."

Founded in 1890, Belton Park Golf Club lies within the spacious parkland of the historic National Trust estate of Belton House. The 27 holes are arranged in three loops of 9, all starting at the clubhouse. The course is home to a herd of around 600-800 deer in an area that was once used as a training camp for troops during World War II