by Charmian Robinson
in Schools & Colleges
on 24 Dec 2012 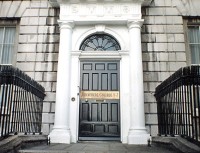 Belvedere College is a private Jesuit secondary school for boys located on Great Denmark Street, Dublin. The college currently has almost 1,000 enrolled students. It was founded in 1832. George Augustus Rochfort (1738-1814), who became the Second Earl of Belvedere in 1774, built Belvedere House, whence the college gets its name.

Belvedere has a strong rugby union tradition, being one of the traditional 'Big Three' in Ireland, along with Blackrock College and Terenure College. In 2005, for the first time in the college's history, they won both the Leinster Junior Cup and Leinster Senior Cup. The college is also renowned for producing both excellent cricket wickets and players.

For the first time in many years, pupils at Belvedere College have had a season of uninterrupted play on pitches in top condition. Only three years ago, it was commonplace for the pitches to be so waterlogged that it could take up to six weeks for them to recover from a game. This would lead to the best-case scenario of having to reschedule matches or, at worst, cancelling the fixture altogether.

Belvedere has seven pitches; three senior and three junior rugby pitches, one football pitch and two cricket squares. The main square has eight wickets and the other has just a single wicket. There are also training areas between the pitches. Six of the pitches are on the main site which is on the Navan Road, and the seventh, a rugby pitch, is on the site at Distillery Road.

The man in charge is Head Groundsman, Dave Geraghty. He joined the college in August 2007, and recalls his reaction when he saw the condition of the seven pitches for the first time. "On the main pitch, the grass was thin with shallow roots, whilst the rest were thick with weed coverage. It was not an ideal scenario for an establishment with such a fine sporting tradition. Compaction was obviously a problem considering the amount of surface water around. I knew I had a real challenge on my hands."

"I gave myself five years to get the grounds the way I wanted them," he explained. "After the first year of basic maintenance, the college was very supportive, providing the budgets to purchase essential equipment like a new mower, sprayer and fertiliser spreader."

"This was great for keeping the grass strong, but there was still a serious compaction problem and, when it rained heavily, I would have to cancel matches for at least six to eight weeks. I knew I would have to start making significant improvements to counter this."

In 2009, Brian O'Shaughnessy, Campey Product Specialist for Ireland, learned of the problems at Belvedere and suggested that he tried out the Imants Shockwave. Brian believed the machine would not only provide an instant solution, but would also, long-term, have a lasting benefit.

"I couldn't get over how quickly the surface water drained away after the machine was used for the first time, or how clean the finish was," said Dave. "It was a major breakthrough to know that a way had been found to make a huge improvement to the structure of the soil. I was convinced that this would radically change the amount of play I could get on each pitch."

"If I had not seen it myself, I wouldn't have believed that such a dramatic change could be achieved in such a short space of time. Truly impressive." said Dave. "After treating the pitches, the number of games and training sessions cancelled in a year has gone from around forty percent three years ago, to this year, where, out of 160 games scheduled, none were cancelled and only two training sessions were called off." 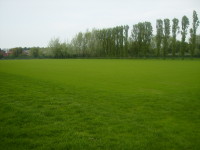 "The conditions of the pitches are so good I can now overseed with confidence using our Vredo compact seeder. I know the seed will penetrate 10mm into the surface and will give nearly a 100% successful germination rate, which is perfect for pitch renovations."

The treatment has just been the start of a comprehensive programme. In March 2011, the rugby pitch on Distillery road was chosen for a complete pitch renovation. Belvedere College allowed other interested parties to come along for a Renovation Open Day to observe the procedures.

Dignam Landscapes supplied five tractors, with drivers, to use for the two days required to carry out the work.

The first stage was to remove the surface top layer complete with any poa-annua or organic material, leaving a smooth level surface. A Koro 2.5m Field Top Maker was used in this instance. 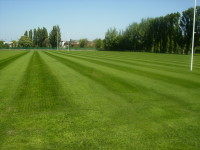 Topdressing followed, applied using Dakota 410 and 412 Turf Tenders. To incorporate the dressing and aerate the underlying soils, a Koro 1.9m Recycling Dresser worked through the soil pan to create a mixture which would drain more effectively, and provide an excellent environment to encourage microbial activity which, in turn, would promote a healthy rootzone.

Dave has his own 1.55m Shockwave, which had already proved its worth at Belvedere but, to get through the necessary workload in the limited time available, a 2.2m model was used to relieve any deep seated compaction.

This method is always going to be an essential step in achieving the complete rebirth of a sports pitch. "It's not just about improving drainage, drying out the soil, reducing the compaction. What was most noticeable was the overall quality of the playing surface," said Dave. "It has obviously had a dramatic effect on the rootzone, because the grass is strong and able to withstand the impact of continuous play."

Levelling and amelioration of the top into a fine tilth ready for seeding was achieved using a Koro Speed Harrow 4100, leaving the surface in the perfect condition to maximise germination. A Raycam 1.8m Dimple Seeder was used to apply the seed. 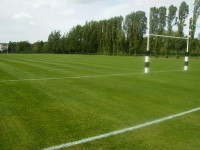 On completion, Dave decided to leave the pitch for a week, just to let the ground firm up before the first fertiliser application. As luck would have it, April was the driest in years and the fertiliser was spread without being washed away. The grass was already up, ready for its first cut, by the end of the third week.
By the end of the sixth week, the goals where back in place and the pitch was marked and ready to go for the seniors to commence their training.

The renovations only took two days, yet the new rugby pitch now looks quite spectacular. Dave is very impressed; "I can't believe the amount of work that was covered in such a short time," he said. "In fact, it is quite astounding how quickly everything progressed."

"The speed at which this pitch has recovered, from what can only be called extreme renovation processes, is remarkable. Within only three weeks, we were cutting the new grass. After five or six weeks, the pitch is in immaculate condition and fully operational again."

Dave is delighted with the performance of the pitch during this last year. "The teams played and trained for the entire season and there were no fixture cancellations at all between August 2011 and April 2012, which was brilliant. We had only one tricky area around the 22m mark. It gets a lot of use because it's the spot where all the teams seem to concentrate their training. Fortunately, with our own Shockwave on site, we have used it twice since the renovation to relieve deep compaction caused by this particular concentrated use." 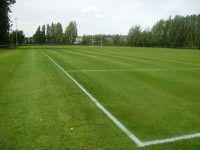 "Ideally, I would really like to be able to renovate the pitches to this standard once every three or four years."

Alongside this extensive recovery activity, Dave operates a regular maintenance and operational regime. He explains what's involved. "The rugby season finishes just before the Easter holiday. The first job is to get the goalposts down in readiness for the cricket season. All the pitches are then converted into cricket outfields for four months."

"I will first use the Shockwave on all the pitches. It really has done wonders on both sites. None of the pitches had been topdressed prior to me starting the job, but I've since got two done this year. My plan is to do some every year on different pitches but, like everything, it's all about budgeting."

"All the pitches get overseeded and fertilised, before the cricket starts, to help them recover from the previous season.

"I start working on the wickets mid-March, with light rolling, and work up to heavy rolling when the soil conditions are right."

"I begin preparation of the wicket ten days before match day. Treatment of the wickets includes applying a fertiliser for the spring/summer at the beginning of April, and a spray for the control of wormcast and diseases such as Fusarium. This will be done on both squares. Then, it's just about making sure they are in perfect condition for the four months of the season. Subject to the weather of course! And, it hasn't been good this year at all!"

"Fertiliser will be applied again, in mid-August, on all the grounds in anticipation of the start of the rugby season in early September. The goals will go back up and made secure, and the pitches marked out for the new season."

"The pitches are cut twice a week, brushing them when conditions are right, and marked out on a Wednesday and a Friday. I'm also responsible for ensuring the dressing rooms and the surrounding areas around the grounds are treated with respect and kept in good order."

"When the kids are off on their Christmas break, I take the opportunity to spray the two grounds with liquid iron. This helps retain good colour and keeps the grass strong during the winter months. I'm not a fan of rolling pitches but, because they are used so much, I have to do it occasionally. "

All this work continues throughout the whole season, which keeps the players and coaches happy. "Which is, of course, the point of all of this," declared Dave with a smile.