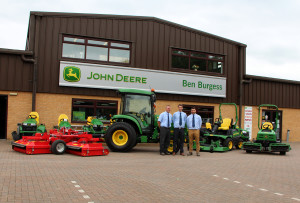 John Deere's long serving eastern counties dealership Ben Burgess & Co Ltd will be taking over the trading area currently managed by A J & R Scambler & Sons Ltd of Bourn in Cambridgeshire, with effect from 1st November 2016. After nearly 25 years as a John Deere dealership, Scamblers will be looking to continue working with other manufacturers in the grounds care market.

With its headquarters in Norwich and an additional five agricultural and turf outlets in Cambridgeshire, Norfolk and Suffolk, Ben Burgess has held the John Deere franchise for 50 years and has been an established grounds care provider since 1962.

The dealership had previously expanded its grounds care business into the Peterborough area at the beginning of 2016, operating from its depot in Coates, Cambridgeshire. Customers in the new sales area, which covers parts of Cambridgeshire and Lincolnshire, will be supported initially from the Ben Burgess Coates and Newmarket depots.

Paul Thomas will be moving from domestic to commercial equipment sales to work alongside Chris Pateman in the new area. Ben Burgess will also be looking to appoint a new domestic sales person as well as additional sub-dealers to support sales and service of John Deere's full professional and domestic turf equipment range across the area.

"We look forward to working with new customers and developing the relationships already in place," says Ben B Turner of Ben Burgess GroundsCare. "We will also be adding further parts and service resources in order to ensure our new customers are fully looked after, alongside Paul joining the commercial sales team."

John Deere Limited turf division sales manager Chris Meacock adds: "We would like to put on record our thanks to Tony Scambler and his team for their partnership with John Deere over the past two and a half decades. Ben Burgess is one of our longest serving turf dealers and we are confident that the dealership will continue to provide the highest possible standards of customer support to existing and new customers."