0 Best for the West!

When Wentworth's West Course closed to play on 1st June this year, so began the final phase of the club's most ambitious project in twenty-five years, the modernisation of all eighteen greens to USGA specification.

Despite its tournament pedigree, and enduring popularity as a classic Colt course, a renovation programme began in 2005 which involved the rebunkering and lengthening of certain holes, to ensure the course continues to challenge tomorrow's golfing elite in the way the architect originally intended when it was first built in 1926.

Sports turf contractors, MJ Abbott Limited, were appointed to carry out the work under the supervision of Golf Courses Manager, Chris Kennedy. Over the past four months, all eighteen greens and greens' complexes have been reconstructed while greenside and fairways bunkers have been reviewed, with some remodelled and others removed and re-sited in order to enhance play.

Each and every facet of such a project requires a substantial amount of planning and research. Time constraints created by the club's commitment to hosting the BMW PGA Championship in May 2010 meant that seeding the greens wasn't an option open to them, so it was in June 2008 when Tillers Turf Company was approached by the STRI's Jeff Perris, the original project consultant. 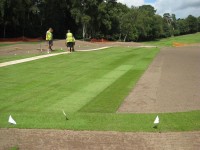 Tillers has been growing turf since 1983 at its nurseries near Lincoln for both sport and landscaping, and golf has always been an important sector for them.

"We were asked to attend a meeting at Wentworth last June and, following in-depth discussion about their requirements, were asked to submit a proposal for the project team's consideration", recalls managing director, Tim Fell.

"Unusually, the agronomists' specification was for 100% Browntop bent turf. The two standard types of turf we grow for greens are fescue/bent and creeping bent, but there was no reason not to consider growing straight colonial bent. The principal requirement was for us 'to supply Poa-free turf' and, from past experience, we had total confidence we could meet that brief."

Chris Kennedy explained that it was predominantly recommendations from those 'in the know' about turf that led him to select Tillers. "I've bought turf from various growers over the years, but I asked a range of people in the industry for their opinion - my peers, the 'middle men' who supply turf and agronomists - and their name came up again and again as a company who had the best quality turf, the fewest returns and excellent customer service. We asked three companies to submit proposals and everyone was in agreement that Tillers' proposal best met our requirements." 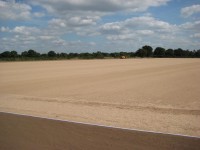 Tillers were awarded the contract to custom-grow the turf and preparation began to source the specified rootzone and seed from suppliers.

The turf was grown on Rufford's MS35 sand from the company's Messingham quarry near Scunthorpe. Although the Turfstart rootzone used in the construction of the greens at Wentworth was from Redhill quarry in Surrey, the particle size distribution mirrored the Messingham material exactly, ensuring complete compatibility.

Tillers Turf has grown its specialist turf on Rufford's rootzones for more than a decade and Tim Fell has total confidence in the products they supply. The company's in-house laboratory at Moneystone Quarry, Staffordshire, is one of only three laboratories in the UK, and fourteen worldwide, that take part in the USGA Greens Section Proficiency Testing Programme. The rootzones were tested in-house and verified by the USGA accredited European Turfgrass Laboratories (ETL) in Stirling.

The selected seed was sown in mid-July. The specification stated that cultivars were to be selected from the top five on the BSPB/STRI seed listings. 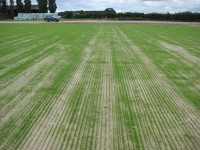 Eventually, it was a Barenbrug blend of 50% Heriot and 50% BarKing Colonial Bentgrasses that was the project group's preferred choice, BarKing for its wear tolerance and winter colour, and fine-textured Heriot for its summer performance.

Jayne Leyland, Barenbrug's Research & Development Manager, agrees that colonial bent was the best choice for the greens turf at Wentworth. "100% bentgrass turf offers the potential for greens to perform under additional stresses such as shade, high-volume winter play and very close mowing heights. Growing it requires great skill and expertise, and when Tim Fell took me to see the finished turf on a recent visit the quality was outstanding. Great credit must be given to his team."

"The main challenge for us in growing turf for greens is to produce a turf that's strong enough to lift and handle, without building up a thatch layer," Tim Fell explained. "With no fescue in the mixture, strength was always going to be compromised, so we needed the full twelve months growing time."
MS35 sand was spread over the nursery at a depth of 15mm, and the seed sown into it in mid July. Temperatures were well into the high 20s at this time and it was vital to keep the sand damp to ensure quick, even germination. 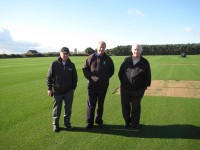 Once established, the turf was maintained at a height of 13mm for the first six weeks, then gradually reduced to 6-7mm. It was verti-cut regularly to control lateral growth and topdressed every three weeks with the MS35 sand at 2kg/m2. The topdressing was important to achieve density of sward and to dilute organic matter accumulation.

Throughout the growth period, Chris Kennedy made regular visits to monitor its progress, as did others involved in the project, including George Shiels, the STRI agronomist, the rootzone supplier and Nick Martin from Scotts whose fertilisers provide the nutritional element of the TurfStart rootzone used on the greens.

Tim continued: "Although southern England seemed to have an early spring this year, the east was blighted by constant winds off the North Sea, which kept temperatures down. It was only well into May that growth really took off. This caused us some sleepless nights because we knew we were up against a very tight time frame. The original intention was to bring the height down to 5mm, but we decided to keep it at 7mm to eliminate any possible stress." 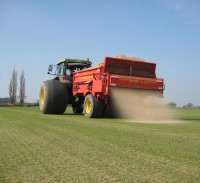 Almost a year to the day from when it was sown, the first batch of turf was harvested in standard, one metre square rolls and sent on its journey south. The daytime temperature was reaching the mid 20s, so the turf was lifted in the early hours of the day and put straight into refrigerated transport at 4°C. Upon arrival on site it was offloaded by the contractor and laid immediately.

"We were very pleased with it" Chris Kennedy confirmed. "Growing Poa-free turf is a very, very tall order for any grower but, aside from a tiny spot here and there which we pulled out by hand, it was as specified."

The turf supplied for the green surrounds was Tillers Arena, a mixture of ryegrass, fescue and smooth stalked meadowgrass. It was chosen for its hard wearing characteristics, and for the colour definition it provided against the turf on the greens.

Once laid, the new greens were rolled and watered for a week to ten days and topped with the mower. They've since been topdressed four times with the sand rootzone. "My staff are now carrying out daily mowing and have reduced the height of cut from 7mm to 5mm, which is what we'll maintain it at through the winter." 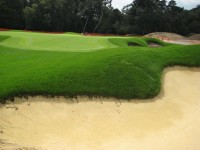 Agronomist George Shiels added: "The turf that Wentworth received is a testament to the skills of the grower and to what is achievable when you combine the expertise of those in the project group with that of a premium grower. What has impressed me most throughout the past year is that Tillers is a totally customer-focused supplier. Tim and his team enabled the project group to play an active part in the production process from start to finish, accommodating our requirements for seed, fertiliser, topdressing, cutting heights and additional treatments. In my experience, the client rarely gets any input into the production process."

"Our collaborative decisions paid off and the result is now in-situ for all to see."

On that point, Tim Fell agrees. "I've very much enjoyed working with Chris, Jack and George on this project. When you're working closely with people you get to know them well - and that's a real bonus. It's the sort of job we relish because it demands the best from everyone involved. The guys on the turf farm, led by production manager Stephen Richardson, have done an outstanding job. They have shown formidable attention to detail in every part of the process. They're all looking forward to going down to Wentworth when the last turf has been laid."