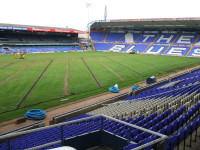 Birmingham City F.C. is set to enjoy the Premiership now that extreme weather conditions have tested their new pitch.

The new surface and comprehensive drainage system installed in a joint operation by J Pugh-Lewis and Premier Pitches has withstood rainfall, which caused severe flooding in the area and put many Northern sporting facilities under water.

"We were looking to improve the surface drainage of the pitch and provide a more reliable surface in the light of the club's return to the Premiership," explains STRI agronomist and adviser to Birmingham City, Andy Cole.

Due to the possibility of end of season play offs it was the middle of May before Premier Pitches began de-compaction treatment to a depth of two feet with the company's Air Lift Machine. Pugh-Lewis followed, installing a new drainage grid system with lateral pipe drains at five metre centres and sand slits at 700 mm centres over the whole area. "Although the existing drainage system had failed in January it had sound foundations," says Tim Pugh-Lewis, "and we installed the new drains at a different angle so they would cut into the old ones.

We also installed new main drains." Carl Pass of Premier Pitches followed with his Koro Field Topmaker to take 40 mms off the soil based temporary turf laid in January, before harrowing nearly 550 tonnes of sand into the root-zone to ameliorate the existing soil and improve surface drainage. Premier Pitches then trimmed and graded the pitch and undertook the fine finishing with BLEC Rotary Rakes before over-seeding and rolling. 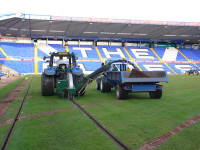 "The grass came through very well despite what I can only describe as "Biblical" rain shortly after the seed was sown," recalls Andy Cole who specified the renovations. "Because of the sheer volume of water falling in such a short space of time and the speed with which the pitch was draining I was concerned that the seed would be washed away before it had had time to germinate. In the event we had very little wash out."

By the 22nd of June the new sward had established, but Head Groundsman Martin Kelly had ample opportunity in the days that followed to assess the merits of his new pitch. As towns and villages in Northern England went under water Birmingham City ground remained virtually dry. "It puddled in one or two areas but the water disappeared within minutes," Martin reports. "The drainage is fantastic. It doesn't matter how much it rains this season, I now know that this pitch works."