0 BIGGA Greenkeepers gear up for the Open 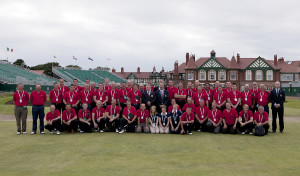 As the world's premier golfers head to Muirfield for The 142nd Open Championship, they will be supported by a committed band of BIGGA volunteer greenkeepers who play a critical role away from the spotlight.

Some 56 of the Association's members - who form the official Open Support Team - will be travelling from across the UK and worldwide to support Course Manager Colin Irvine and his team at the famous links on the West Coast of Scotland.

From next Tuesday 16 July until the winner is crowned on Sunday, various members of the Team will be assisting with the preparation of the course for every day's play.

A member will also be sent out with each match to rake every single bunker the players land in during the Championship as well as attending any other greenkeeping issue that arises.

For example, following an enormous and unexpected downpour at Royal Lytham & St Annes on Thursday night last year, several Team members were woken at 4am to deal with the aftermath. With millions of worldwide TV viewers tuning in just a few hours later, you can see how important their job is.

One excited Team Member is Gary Salisbury, Greenkeeper at Burghley Park Golf Club in Rutland. He said: "It's an amazing experience and one you don't often get the opportunity to be involved in. You pick up all sorts of knowledge from the home greenkeeping team as well as help and advice from other BIGGA greenkeepers on the Support Team, which you can then take back to your own course.

"It's very tiring and very hard work but it's so rewarding from every point of view, and of course you get as close as it's possible to get to the likes of Tiger Woods, Rory McIlroy and Justin Rose. I can't wait."

The Association received applications from members as far afield as Vietnam, Australia and the USA all keen to play a part, and carefully selected the successful applicants to ensure a good mix of experienced, overseas and younger members.

BIGGA's General Manager Tracey Maddison said: "Over the years the Team's responsibilities have increased and the R&A and host club are keen that there are some experienced heads in the key roles during the week. As part of the process there is a guarantee that a certain number of first time applicants are selected as well as a number of members who are engaged with BIGGA at Section level or through our Continuing Professional Development Programme.

"The team is split into five 'pods' with each having a Pod Leader who has prior experience of the event. Each pod remain together throughout the week and generate a real camaraderie, and everyone's really looking forward to this year's event."