0 BIGGA greenkeepers on song at the open 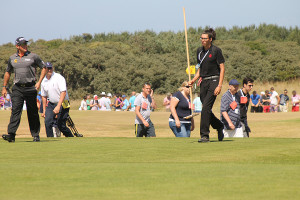 A team of volunteer greenkeepers from BIGGA have arrived back at their courses after a frenetic week preparing the links at Muirfield for the world's greatest players - and raking over 1,500 bunkers in the process.

The 60-strong team from across the UK and the world walked the course alongside the professionals during each round - and also worked before play and in the practice area.

The highly qualified team - a mix of youngsters and more experienced members - embraced this fabulous personal and professional opportunity and played no small part in ensuring the tournament was a success.

You may have seen them on TV dressed smartly in black, and as well as taking the opportunity to work at the superb links course, they emerged with tales from the week to tell their children and grandchildren.

But it was extremely hard work too, with some early starts and late nights on the course.

In total, the team raked a staggering 1,571 bunkers during the tournament - not including preparatory work and the practice bunkers.

This included a mammoth 577 during the Second Round, and the overall total is one of the highest the team has ever conquered in their 29 years of supporting the championship.

Team member Phillip Snellin, from Donaghadee Golf Club in Northern Ireland, said: "It was the best week of my life. On Saturday I followed Tiger Woods and Lee Westwood - how do you top that?

Many of the greenkeepers on the team have become firm friends and it was enlightening to speak to them about their courses which vary so widely in type and size. I also learnt so muc 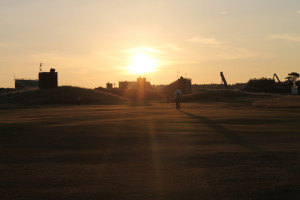 h from working on such a prestigious links for a week."

Sean Sullivan embarked on a mammoth journey from The Briarwood Golf Course in Montana, USA to join the team - and Ronan McKeown flew in from his role as Golf Course Superintendent at the Montgomerie Links in Vietnam to link up with the other team members from all corners of the UK.

Many of the team enjoyed chats with the players during their rounds.

"At the start of the round Senior apologised to me for the amount of bunkers he was about to go in during his round! In the end he hit six."

The Association's board members also provided hands-on assistance including manning the BIGGA cabin close to the first tee.

BIGGA also boasted a marquee on site where visitors could find out more about membership of the Association and the superb educational and career benefits on offer for greenkeepers.

The teamwork in tandem with the home greenkeeping team and volunteers from neighbouring courses combined to prepare a stunning links course that proved a stern test for the world's best players. 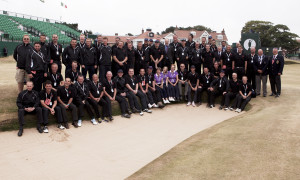 Claret Jug and they then enjoyed the opportunity to pose for a keepsake photo on the 18th fairway.

Jim said: "The team conducted themselves with the utmost professionalism during the week and it's an experience that will enhance their professional and personal lives.

All of them made the difficult decision to spend a week at Muirfield away from their courses, and it's something they will remember for the rest of their lives. Their enthusiasm and energy was wonderful to see and it was truly a proud week for the Association. "