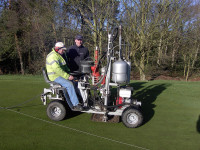 An experienced course manager and BIGGA member is enjoying the benefits of a special discount, by aerating his greens to one metre below the surface on a regular basis.

Wayne Ganning, who has been in charge of Moor Hall Golf Club in Warwickshire for the last ten years, had his worst four greens treated by Terrain Aeration in November 2006. "They were very compacted and holding water throughout the winter," he remembers. "This is a parkland course, and it's 76 yrs old. The greens are all constructed in the old 'push and fill' style and they're lined with clay to retain moisture. We've got variable soil types but mainly a clay loam on the greens."

Terrain Aeration, working with Airforce Scamper needed to employ the JCB hammer to insert the one-metre probe throughout. Having injected compressed air at 20 bar, and inserted dried, milled seaweed on the final air blast to keep the underground fractures and fissures open, Wayne filled the probe holes with Lytag and Terrain Aeration returned to Suffolk, only to be recalled this spring.

"This time I got them to do all 18 holes," continues Wayne. "The compaction was obviously less severe on the four greens they'd previously treated, these were the only ones that didn't need the JCB hammer. Basically we relieved compaction and aerated the subsoil. It's all about getting air to the roots and the subsoil to promote a healthy sward. It's something we're looking to do on a regular basis."

Perhaps it's just as well that as a member of BIGGA, Wayne is entitled to a 15% discount on Terrain Aeration's services. This year's treatment cost considerably less per day than in 2006.