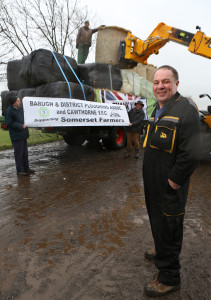 A Course Manager who combines his greenkeeping role with his job as a farmer has ridden to the rescue of a flood-hit Somerset farmer after seeing his plight on TV.

Phil Rowbottom is a BIGGA member, head man at Woolley Park Golf Club and member of the National Farmers' Union - and was moved by a TV interview with Somerset farmer James Winslade who has lost 800 acres of his 840-acre farm to floodwater, with the water now chest-high in his kitchen.

James managed to save his 500 cattle but had lost all of his cattle feed. So Phil joined forces with neighbour Andrew, an agricultural contractor, and loaded 25 tons of cattle feed on to their tractors.

They then set off from Phil's proprietary golf club near Wakefield, West Yorkshire, at 5am on February 13 to make the epic 225-mile journey to Bridgwater, which is at the heart of the badly affected Somerset Levels.

Travelling at a top speed of around 30mph, 'Tractor Aid' arrived 11 hours later to meet a grateful James at nearby Sedgemoor market.
Phil said: "I've been watching the news for the last few weeks and saw what a mess the Somerset farmers are in. I saw an interview with James and you couldn't fail to be moved by it, even more so as a fellow farmer.

The water is chest-high in his kitchen and he has lost almost everything, and the pictures showed the only way he could get to his farm was by boat.

"I just thought as a fellow farmer, I could help him, and the thing he really needed was cattle feed. James's feed which he had been storing over winter is now rotting in sheds, it's terrible.

"I don't have any cattle on my farm but I borrowed some feed from local farmers and set off. The support we had on the journey from the public has been fantastic, it makes me really proud."

John said: "Golf and agriculture are inextricably linked as they are both so dependent on the weather. If golf courses are underwater for too long the grass rots, and it's the same with crops in farming. We've been hit by the relentless rainfall as so many other golf courses have, but luckily our site drains well and is high up.

"We made a few calls and mentioned 'Tractor Aid' on Twitter and it's gone on from there. We felt Somerset had been neglected by the media so hopefully this has reminded everybody of the seriousness of the situation down there."

Their amazing journey has caught the public's imagination with Phil even being interviewed live on the BBC's 'One Show', BBC Radio 2 and in local newspapers.

Phil featured in Greenkeeper International last June focusing on his combined role as Course Manager and farmer. Woolley Park is a 27-hole facility, and the adjacent farm's main function is drying and storing grain for local merchants and farmers.