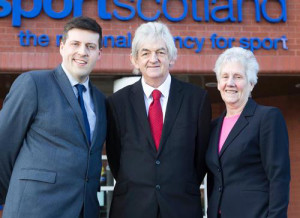 Sportscotland's "biggest-ever" capital investment in tennis signifies the body's intention to put sport front and centre of national consciousness, according to its chair Mel Young.

Last month, the funding organisation partnered with the Lawn Tennis Association (LTA) to plough £7.5m (US$9.2m, €8.9m) each into an indoor facilities programme, which will see the number of weather-protected tennis courts double over the next decade.

Young - who was appointed as chair just over six months ago - told Sports Management that sportscotland would embark on further initiatives of this type to make Scotland a "really sporty nation".

"Investing in tennis fits in with our overall plan," he said. "We're trying to build a world-class sporting system for everybody in Scotland, although tennis has grown in popularity because of the Murrays."

He highlighted work done on the £33m Oriam sport centre, and the future National Centre Inverclyde - which is being billed as one of the most advanced sport centres for disabled people - as evidence of sportscotland's intention.

One of Young's main considerations was making sport and physical activity within reach for people from hard-to-reach demographics, such as those from deprived inner city conurbations, or those in rural areas.

"It's an exciting time," he said. "The ambition is to make Scotland a really sporty nation and we're pushing down the track. We want to win medals, but we also want everyone involved and having fun doing it."

Sportscotland and the LTA are on the hunt for partners - such as local authorities and leisure trusts - to build the new facilities, with an emphasis on taking a "balanced approach" by spreading the venues around the country.

Young was also keen to stress that it would be an advantage if potential partners had their own capital to invest in the project as well.