2 Biggest ever turf conference in Denmark a great success! 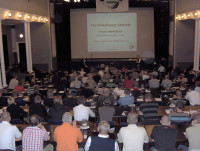 On 25 October 2007, 180 people crowded into the theatre at the historic Torvehallerne venue in the beautiful resort town of Vejle in Jutland, Denmark for an education-based 2 day conference of the highest international standard. The DGA noted with satisfaction that no less than 30% of the association's total membership was in attendance. The education conference was preceded on the 24th by the association's AGM and a Greenkeeper Golf Championship.

The DGA started as a social get-together in 1963, but in the last decade it has been transformed into the focal point of the golf industry in Denmark. As others in Europe have discovered the golf industry's customers expect more and more from greenkeepers and turf care standards have been raised.
The Duty of the DGA

With professional expectations rising it became the association's duty to bring its 520 members up to a higher skill level. 107 DGA members are now trained and certificated as skilled greenkeepers but the remainder are largely self-taught particularly in turf management and people management. A conference with a wide range of topics and international speakers, who could communicate well to greenkeepers at all levels of experience and ability, was the vision of the DGA leadership/organising team

The Desire and the Journey

It was felt that golf course design and people-management topics would be themes to attract greenkeepers from Denmark and Norway. The conference was originally planned as a one day event, with a couple of Danish speakers and one main international speaker. However, we soon learned that top rated golf course architects, agronomists, greenkeepers and management experts from the UK, the USA and Norway were more than willing to make the journey to Denmark.
REPORT ON DAY ONE
Mechanisms and Habitats

On the first day, a cheery Alex Vickers from TurfTrax Ground Management Systems Limited in the UK opened the programme with an absorbing introduction to the earth's coping mechanisms and drainage problems. Alex was followed by Environmental Consultant Jesper Vagn Christensen who called passionately for better management of the habitats that surround the golf course.

After lunch Master Greenkeeper John Quinn fascinated us with his story of a hickory golf course (10 miles west of St Andrews) that was long forgotten, but has now - with John's help - been restored to its former glory.

After John's talk, the conference moved from the restoration of old courses to the development of new ones. Poul Anker Lübker, one of Denmark's biggest golf developers outlined his current project - building the country's first golf and residential resort. Known as the Lübker Golf Resort, it is situated just north of Aarhus - the second larges city in Denmark. The course itself is a £10 million Robert Trent Jones II design within a project that has a total value of approximately £100 million.
FEGGA Feature

From developments with national prestige, the conference moved to an international perspective with Dean Cleaver's presentation on the exciting training and development opportunities offered through the Federation of European Golf Greenkeepers Associations (FEGGA). Dean stressed the need for European Greenkeeper Associations to continue to work as a team to ensure European greenkeepers are the best in the world.
Old Tom Morris

A day full of variety ended with an entertaining presentation full of valuable insights into the early days of golf course design. Chris Haspell, the newly appointed course manager at Castle Stuart Golf in Inverness, described in detail an Old Tom Morris design which he and others have recently discovered.

The day began with a sincere apology from master greenkeeper Bevan Tattersall, who had to give an urgent family matter priority over his conference talk. The conference extended its best wishes to Bevan and his family and his absence gave more speaking time to Howard Swan (Swan Golf Designs) and Frank Newberry (Enjoyable Seminars).
A Drinking Contest at Breakfast Time

Howard and Frank promptly claimed that they 'could not agree who would speak first' so they asked the audience to nominate three greenkeepers to participate in a contest to determine which of the two speakers would go first. An American working in Norway, an Englishman and a Dane were subsequently challenged to compete in a drinking competition.

In the ensuing contest, the greenkeeper from Denmark was the fastest to finish his beer, so he spun his empty bottle to see which speaker should go first. This resulted in Frank doing the first session of the morning, followed by two sessions from Howard and then another session from Frank.

Frank, in his two sessions, inspired delegates with amusing real-life examples as well as some practical tools and techniques that he hoped would help them upgrade their image, their salaries and the greenkeeping profession as a whole.
Golf Course Design - the history and the future

After lunch, project manager Michael Bengtsen of Ledreborg Palads Golf gave an illustrated review of the progress made so far on their Nick Faldo designed new golf development west of Copenhagen. One of Denmark's soccer icons Peter Schmeichel (ex- Manchester United), is one of the people behind the project.
Golf Course Design - the RTJ2 way

The famous golf course design firm Robert Trent Jones II was represented at the event by their Chief Design Officer Bruce Charlton who continued where Howard Swan had left off earlier in the day. Bruce gave delegates a positive and optimistic view of modern golf course design. RTJ2 has 3 projects in Denmark at the moment - two near Copenhagen and one at the Lübker Golf Resort mentioned earlier.
Grass Species Testing in Scandinavia

The last speaker on the programme was Trygved S. Aamlid, from Bioforsk Research in Norway. He revealed the results of the first tests of grass species for golf greens in Scandinavia. In northern Europe we have usually relied on test results from the STRI's testing site at Bingley, UK. The new results are very different from those gained from tests done in Bingley, presumably due to climatic differences. These differences will have major implications for the work of greenkeepers in Denmark.

The DGA is very grateful to BIGGA's National Chairman Richard Whyman for accepting their invitation to be guest of honour at the conference. The personal and financial support of BIGGA is most welcome and the DGA feels that Richard's presence over the entire conference has brought the two Associations closer together.

Finally the DGA wishes to record its sincere thanks to all the conference speakers, without whom the conference would not have been the great success it was.