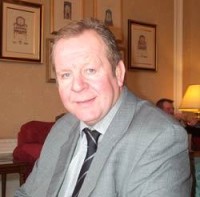 Bill also quipped about his thirteen years as a captain on 'A question of sport', where he first sat opposite the late (and great) Emlyn Hughes, and latterly Ian Botham. In particular, he elaborated on the famous Princess Anne broadcast, where she was critical of Emlyn's spelling.

In front of a packed suite at The Swallow St. George Hotel, Bill also talked openly about his surprise that synthetic surfaces could be considered for use in top class sport.

He said " I could not imagine playing on an artificial surface, although I can see the need for it's use as a training aid and for some high wear local authority venues. As a player I played on some awful as well as some excellent surfaces, but in more recent years, in my capacity as a TV pundit, natural grass pitches have clearly improved beyond anything we were lucky enough to play on". 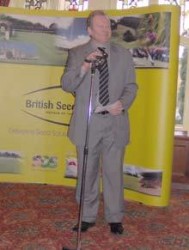 "Landsdown Road in the rain was also a difficult venue to play at, but thoroughly enjoyable, even though we quite often lost. The atmosphere was always amazing inside the ground and we were always warmly welcomed, because we went there during the worst of the troubles in Northern Ireland, when other international sides had refused to go."

Bill went on to say that the most important factor for the team captain was the wind speed and direction, this determining which way to kick off, although from the point of scrummaging, the pitch surface needed to be level, firm enough for a stud but when tackling, the players appreciated a soft landing.

Bill quoted Twickenham as a great surface to play on, but also highlighted The Wanderers cricket ground in South Africa, where the Groundstaff had managed to turf over the cricket table in order to host some rugby matches. The ground being used during the time that Ellis Park was being re-built. He also mentioned that Murrayfield was a great venue, but that may have been because England always won there!

Bill, like most people outside of the Industry, was unaware of the science behind modern turf pitches, but with the help of British Seed Houses and friends, his understanding has been greatly increased, and his kindness, speaking in praise of natural grass, very welcoming.

The British Seed Houses reception drew an audience of around 150 from all sectors of the turfgrass industry. Summer and winter sports pitch Groundsmen, Greenkeepers, agronomists and architects with a keen interest in the future of natural grass were all well represented.

British Seed Houses general manager Simon Taylor thanked everyone for attending and stressed that it was important for the industry to work together to counter the threat from the artificial pitch lobby: "There's nothing better than natural turf," he said. "We all know it and the players prefer it. But we must speak with one voice if natural turf is to remain the first choice surface for football, rugby and cricket in this country," he said.