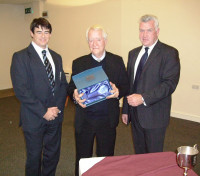 Bill Gordon, the recently retired Head Groundsman at Surrey County Cricket Club's Kia Oval, is the recipient of the England & Wales Cricket Board's Achievements in Cricket Groundsmanship Award 2012, sponsored by Ransomes Jacobsen. He received the award at the ECB's Groundsman of the Year Awards Dinner held recently at the County Ground, Northampton CCC.

Bill started his career at The Oval in 1964 and has served continually since then until his recent retirement at the end of September; however he will stay on at Surrey in his new post of Club Librarian.

During that time he has worked under revered Head Groundsmen such as Bert Lock, Ted Warn and Harry Brind before taking over the custodianship of the famous ground at the end of 2003. His skill, dedication and loyalty to Surrey and the Oval, where the pitches have been long renowned for quality, pace and bounce at both County and International level, has been rewarded by winning the ECB Groundsman of the Year trophy six years in succession and the One Day trophy for five years from 2003-2008.

There have been many memorable moments during his time at the Oval, especially Test Matches over the years, but he will probably always be remembered for producing the decisive pitch that won England the Ashes series against Australia in 2009.

Chris Wood, Pitches Consultant for the England and Wales Cricket Board, who presented the Ransomes Jacobsen award with Northants Chief Executive, David Smith, gave his own dedication to Bill describing him as his "colleague, lifelong friend and indeed mentor" as his own career path also started at The Oval back in 1967.

Bill, who has been described as a 'reclusive eccentric' by the clearly rattled Australian press, will be sorely missed by all his colleagues' especially for his notorious quick dry wit and sense of humour. Not surprisingly he was given a standing ovation when he received his award.

The overall ECB Groundsman of the Year was won by Nottingham CCC's Head Groundsman at Trent Bridge, Steve Birks.