Most turf managers are aware that grass cuttings, and their disposal, pose an increasing problem. On fairways, parks and many municipal football pitches they may simply be returned to the turf surface. However, to produce a top quality surface the collection of cuttings is a necessity. What to do with the collected material can pose a problem.

Dumping grass cuttings can have environmental implications with regard to the resultant liquid effluent, which is a very concentrated liquid, toxic to plant and animal life. Alternatively, the cuttings can be composted, preferably along with a dry material to absorb some of the grass liquid (grass herbage contains about 70% water). The resulting compost can be used as a soil conditioner/mulch/fertiliser.

However, it may or may not have occurred to you that grass cuttings are a potential source of useful energy. Grasses capture light energy from sunlight and store it as chemical energy in the form of sugars (carbohydrates). In livestock production, the carbohydrate in grasses is used as an energy source for the animals. Ruminant species, such as cattle and sheep, have the ability to extract the energy through bacterial activity in their stomachs.

Energy can exist in many forms and it is possible to change the form of energy in grass to one that is useful to us - e.g. liquid fuel for vehicles; gas fuel for burning; even electrical energy. For instance, grass cuttings can be used to produce fibre for incineration to produce heat; methane gas for burning. This heat can, in turn, be used to produce electrical energy. Ethanol and propanol can be produced for vehicle fuels. Hydrogen gas could also be produced, again a potential vehicle fuel.

The tricky part is releasing the energy in a usable form and in an economically viable system. The two main strategies that look to be particularly promising are (a) the production of methane gas by anaerobic digestion and (b) the production of ethanol by fermentation:-

Methane production from organic waste material is carried out by anaerobic digestion (AD), where the material is processed under airless conditions. A range of bacterial species uses the organic material, particularly the carbohydrate, as an energy source and, as a by-product, produce methane gas. However, a whole range of gaseous products, such as ammonia, carbon dioxide and water vapour, are also produced. The whole mixture together is known as biogas, and can be used directly as a fuel.

However, to produce a more energy efficient fuel, it is necessary to purify the methane. This, again, can be burned directly in a power generator to produce electricity and heat. This is a combined heat and power system (CHP). The potential also exists to pump the methane directly into the national gas grid.
One of the advantages of the anaerobic digestion systems is that it is tried and tested; systems can be bought off the shelf. It has been commonly used by water companies in waste water processing and is being used by farmers for producing energy from animal slurry.

In all AD systems, there is a waste material produced of liquid and fibrous material (digestate). It would be possible to re-apply this to turf as a soil conditioner or fertiliser. In essence, you would be returning the clippings after the available energy has been extracted.

Although actual energy production is dependent on the amount of cuttings produced per given area, the approximate amount of electrical energy produced from 100 hectares of amenity turf, regularly cut, is likely to be in the range of 250 to 350 megawatt hours per year; enough for sixty to seventy homes.

It is evident that, for such a system, the seasonality of growth would need to be taken into account, and so grass storage would be required for feedstock supply during the winter months.

As a final point on biogas/methane, it is possible to liquefy the methane in order to produce a vehicle fuel similar to the LPG available in many petrol stations.

Like the grapes used for wine production, or the barley used for the production of beer and whisky, grasses contain sugars which can be fermented to produce ethanol (alcohol). The fermentation is carried out by yeast species.

The use of ethanol as a fuel has been prevalent in Brazil for many years, the ethanol being produced from sugar cane. Bioethanol production in the UK is being undertaken at a new site on Humberside, where sugar from sugar beet is being used as the feedstock.

However, the use of agricultural land for energy production is becoming a controversial process and, to this end, substantial financial resources are being invested in the potential for waste or spent plant material to be used as a feedstock for ethanol fermentation. 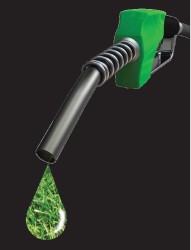 The main material being assessed is cereal straw. In both cereal straw and grass, a small proportion of sugar is relatively soluble and easily accessible for the yeast to ferment to ethanol. However, most of the carbohydrate is present within cellulose, which is insoluble, fibrous material that has to be degraded to soluble sugars prior to fermentation. Again, substantial public and private resources are being spent in optimising this essential degradation process.

One of the major potential advantages of amenity grass is that the proportion of cellulose is much lower than that of straw. This makes the material more conducive to ethanol production.

In conjunction with Nottingham University, the STRI has already carried out some trials to compare different amenity grass species for their sugar content and potential ability to produce ethanol. The differences between species were marked. We now hope to extend this trial into a major research project that will assess the potential from different amenity/sports turf areas for ethanol production.

As a very approximate estimate, 100 hectares of amenity turf should be able to produce approximately 100,000 litres ethanol per year. One of the main advantages of ethanol production, as opposed to anaerobic digestion and methane production, is that seasonality of grass production is much less of an issue.

It is likely that the main interest for the concept of fuel from grass will be from Local Authorities. Some alteration to the turf management strategy would be required. Firstly, the ability to collect cuttings. Secondly, the ability to transport cuttings to a processing hub. Thirdly, the ability to use the waste material remaining after production of energy. Fourthly, storage of grass cuttings, as necessary.

It is also likely that grass would be used in conjunction with other organic waste materials for energy production.
These factors need to be taken into consideration, even before the step of looking at the economics of fuel/energy production. However, there is no doubt that grass is potential energy.

If you would like to discuss the concept further then please get in touch with David Lawson at david.lawson@stri.co.uk