0 Birds and birdsong - ‘Ring’ the changes! 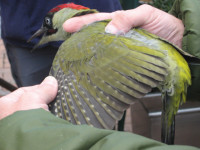 John O'Gaunt greenkeeper and ecologist, Steve Thompson, suggests that a world without birdsong would be a duller place. In this article, he offers a few ideas to help you make a difference

Pause, and think for a moment. What would it be like if we had a world without birds? Birds we might be familiar with here in the UK, like the sound of the cuckoo in the spring, the distinctive call of herring gulls by the coast, a blackbird singing on a nearby roof, the beautiful song of the skylark or the hoot of a tawny owl. Imagine all those birds gone; silence. I for one think the world would be a much duller place without birdsong.

How do you know what birds you have on your golf course or sports ground and why should you monitor and record what you find?

The simple answer to the first part of that question is look and listen. Through your everyday activities as a greenkeeper or groundsman you will see and hear birds at your site. There are lots of good field guides to help with identification. Monitoring and recording of different species is important as it could be an indication of a healthy ecosystem or, indeed, an unhealthy one. But how exactly do you go about monitoring and recording? 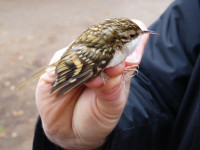 One way is to just simply write things down; keep a written record of what you see, then you can refer back to your notes to see any changes in populations. Another way to help more with the overall sightings and number of birds in your particular county is to report birds to your local county bird recorder, details of which can be found quite easily online. To help with a more countrywide survey, there is a scheme called Birdtrack. This is a project run in partnership with the BTO, RSPB and other organisations in Scotland, Wales and Ireland to monitor migration movements and distribution of birds in Britain and Ireland.

There's even an app for your smartphone.

One of the most widely known schemes for checking on bird movements is the 'Ringing Scheme' run by the British Trust for Ornithology. Check the link to find out more. http://www.bto.org/volunteer-surveys/ringing/about-ringing/history-ringing

Ringing birds is a vitally important way to understand the movement of birds, both locally and all over the world. For example, we now know through ringing birds that swallows spend the winter in Africa and we can track the movement of some species from one side of the world to the other. Such is the case with the Arctic Tern which breeds in the Arctic and then flies south to spend the southern summer in the Antarctic.

On a more local scale, ringing can help keep track of populations of birds. It also helps to identify individual birds and thus keep a record of age. A blue tit we caught at a ringing demo at John O'Gaunt in November 2013 was previously ringed as a chick from a nestbox in 2010, making it approximately three and a half years old (our oldest blue tit to date). The record age for a blue tit is twenty-one.

As a greenkeeper you can get involved with ringing. Contact the BTO to find out your local ringing group and perhaps organise a ringing demo, or train to become a ringer yourself. If you come across a dead bird, check to see if it has a ring on, look at the ring carefully and you will see a unique number, make a note of it.

Check the website below where you will find a link to report a ringed bird.
http://www.bto.org/volunteer-surveys/ringing/about-ringing/faqs

One good advantage of being able to ring birds is to see them close up. This is particularly good for species that are often difficult to see or birds that may appear nondescript, such as the starling which is, in fact, rather pretty. 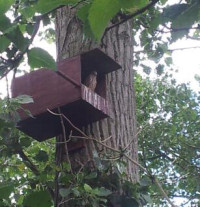 Another good way for greenkeepers and groundsmen to help the birds on their site is to provide homes in the form of nestboxes. These boxes provide an easy way of keeping track of populations of certain species.

The nestbox scheme at John O'Gaunt started in 1996 when I contacted the Hawk & Owl Trust about putting a barn owl box up; two years later, we put up a kestrel box. After several more years, I decided to try some small boxes for blue and great tits and robins. In 2000, I put a few up around the car park and these were quite successful. What I wasn't aware of at the time was just how many boxes we could get up around the site. I took advice from an expert - Peter Wilkinson (a licensed ringer) - who suggested, after a look round both courses, that we could get around seventy to eighty boxes. I laughed and said, don't be daft, we won't get that many. We now have 125 boxes covering two courses!

The boxes come in many sizes; small with either 25mm or 32mm hole for blue, coal and great tits, robins, nuthatches and spotted flycatchers. A blackbird once nested in an open fronted box. Medium size boxes are perfect for woodpeckers, whilst larger boxes suit barn owls, kestrels, tawny owls and stock doves, although they are often also used by jackdaws or grey squirrels. 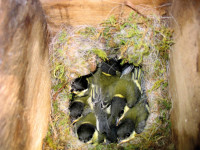 Since 2007, we have successfully recorded 2,253 blue tits, 911 great tits, 20 kestrels, 21 jackdaws and 10 stock doves, so we are making a significant contribution to local bird numbers.

Not all birds, however, utilised the inside of a box. A treecreeper built its nest on a Sequoia tree between the box and the knobbly bark.

Nestboxes are easy to make and various designs can be found online, or you can buy them from RSPB shops, garden centres or online retailers such as CJ Wildbird Foods.

Another survey that fits in nicely with the nestboxes is the nest record survey run by the BTO. All you need to do is record what birds you see nesting and, if you can, how many chicks. To minimise disturbance, there is a code of conduct to follow and more information can be found at the following link - http://www.bto.org/volunteer-surveys/nrs. This survey keeps a track of the breeding success of birds and rise and fall in populations. 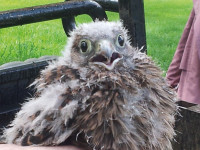 After you have read this article, and when you are back at work:

STOP - When you can spare a minute or two, just stop what you're doing

LOOK - Have a look in the immediate area; what birds can you see?

We can all do our bit to help provide information that could form future conservation policies.