0 Birmingham City - Prepared for the Premiership Freezing temperatures won't stop Birmingham City this season as they take on the Premiership with a new pitch profile and £500,000 worth of under pitch heating.

J Pugh-Lewis won the main contract, (in conjunction with Pitch Heating Ltd.), and having installed the piped drainage system two years ago; they began work in May with the STRI's Andy Cole. "I've been involved with the club for years and worked with J Pugh-Lewis in 2007 when they upgraded the drainage, installing a pipe and slit system which has worked well and provided the basis for the new pitch," he says.

Freezing temperatures last January led to the cancellation of an all important Wolverhampton Wanderers match in the 4th round of the F A Cup and prompted the club to order the upgrade. "At 3.00am on the match day morning it was minus 10 degrees and minus 6 when we got in," recalls Head Groundsman Martin Kelly, "and that was with four covers on, so the Chairman took the decision to install underground heating and a new pitch profile as part of the Board's ten point pledge to supporters." 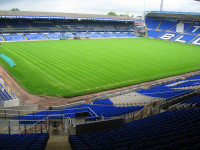 Having stripped the surface J Pugh-Lewis carefully dug out to 400mm depth, leaving the drainage system intact before installing gravel, sand and some of the new root zone. The 30 kilometres of heating pipes were moled in before fibre concentrate was laid on top. "We needed to install a gravel raft/carpet over the existing drainage system and check that the gravel was compatible with the lower rootzone sand," Andy Cole explains. "We used the STRI laboratories to ensure that we had the right materials. We'd decided from the start to go for a reinforced, fibre sand pitch, similar to that of Man. United and used a standard fibre sand mix from Mansfield Sand."

Carl Pass of Premier Pitches came in to spread the final Fibresand concentrate, do the fine finishing and re-seed.

"The whole team worked around the clock and got the job finished in four weeks instead of five," says Martin Kelly. "To finish a week early……..I guess it goes to show how well everyone worked and that they pulled all the stops out to get the job done within the recommended time frame."