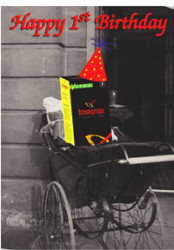 Vitax will celebrate the first birthday of Insignia, launched at BTME last year, with an on going stand party throughout the show.

Kerran Daly, Bigga's new chairman will not only be called upon to draw the winning ticket in the company's annual Greenkeeper's prize draw, but also to cut a birthday cake, marking the success of the company's first new fungicide for some years.

Clive Williams, Vitax's commercial manager who will host the proceedings says that in a year which has produced a warm wet Autumn, perfect conditions for disease to flourish, Insignia has proved its worth and brought the company many new friends.

"If we'd introduced the product in a drought year its effectiveness may not have been so apparent," he says. "As it is, Insignia has become our run-away best seller, and we want to share this success with old and new customers alike."

As well as cake, presents commemorating the occasion will be given out over the three days.