Nestling in 365 acres of stunning Cotswold parkland, bordering the beautiful village of Castle Combe, Manor House Golf Club (part of Exclusive Golf) is an 18-hole, par 72 golf course, one of the most spectacular in the South of England - a fact recently confirmed with the coveted HSBC Gold Star Award.

Originally designed by Peter Alliss and Clive Clark, it is located in an area of outstanding natural beauty. Mature oak trees, manicured fairways and spectacular par 3s, together with the River Bybrook meandering through the middle, bring both drama and beauty to this course.

The Manor House is tended by Estates Manager, Paul Bishop, who has a dedicated team of nine staff (Deputy, Gian Povey, five other greenkeepers, two gardeners and one full time mechanic) to look after the golf course, the Manor House grounds and the estate gardens.

Paul has been at The Manor House since 1994, having previously worked at Haywards Heath Golf Club, Tunbridge Wells Golf Club, Hever Golf and Country Club and East Sussex National Golf Club during its construction. Having been in greenkeeping since 1980, nearly half his working life has been spent here at this truly stunning course, helping it mature and settle into the landscape.

Paul's qualifications include City and Guilds Phase I - IV in Sportsturf, Enterprise and Business Management, and an Intermediate Diploma in Sportsturf. He has also studied Business Management at Cranfield University. He is currently undertaking his Master Greenkeepers Certificate (MG) and, as if he doesn't have enough homework to do, he is also studying for a degree in horticulture so that he can broaden his knowledge of the garden side of life at The Manor House.

Starting at 6.00am, the team run through the tasks for the day. This may include cutting greens (always cut daily), mowing of tees and fairways and checking and raking bunkers as required. The semi-rough is cut as required. Other jobs may include topdressing, aeration, fertilisation and watering. Then, in the Hotel grounds, there is Chef's Kitchen Garden, the Manor House croquet lawns and the idyllic Italian gardens to tend to. In addition, there are chickens to attend to and the recent addition of beehives to provide their own honey.

Much of the course lies over vast areas of limestone that promotes natural limestone grasslands, rich in wildflowers that include early purple orchids, cowslips, ox-eye daisy and horseshoe vetch (where you might just spot a Chalkhill Blue, an extremely rare species of butterfly).

In amongst the large expanse of ancient woodland you will find Roe and Muntjack deer, badgers, foxes, and green and great spotted woodpeckers. Look to the skies and you will see buzzards, sparrowhawks and kestrels. It is a wildlife paradise that Paul is keen to preserve, and he follows the guidance laid out in a document produced in association with The Wiltshire Wildlife Trust. The course now has numerous bird boxes, attracting various species, including owls, which are checked and recorded annually.

The course also has a number of water features that provide a wonderful wildlife corridor for many water loving birds, particularly coots, moorhen, ducks, dippers, herons and the beautiful kingfisher.

Mature woodland dominates the course with many plantations of ash, oak and field maple. The maples are of exceptional size, constituting a notable feature. There are also several elm trees and mature holly trees. The shrub layer includes willow, hazel, elder, spindle and hawthorn. The ground flora includes ancient woodland indicator plants such as wood anemone, enchanters nightshade and violets.

Paul has overseen many improvements to the facilities, including the design and build of the new workshops, mess rooms and storage sheds. He believes that a tidy, organised machine shed is essential in modern day course management, especially with machinery being the biggest investment at any golf club. Having plenty of room for storage and, more importantly, adequately equipped repair facilities, is essential to maintain reliability and value in terms of operational performance. 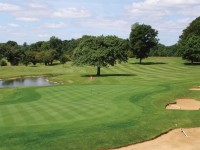 Paul has a full time mechanic who looks after all the machinery needs of the club, ensuring mechanical breakdowns are kept to a minimum and all are operating at peak efficiency. The club hold a good stock of spares to ensure downtime is kept to a minimum.

The club have just purchased two new John Deere Triples, John Deere CX Gator, Toro 450-D semi-rough mower and an electric Gator. Last year the club also invested in forty-six new EZ-GO Electric Buggies which, along with the E-Gator, is very much in keeping with the company's green credentials.

The club have also put in a tarmac service road that winds its way around the course, providing an essential transport system for both the golfers and staff. The course meanders through particularly hilly terrain, with a number of elevated tees and steep drops to greens - the double green par 3 17th being particularly stunning. Walks between greens and tees are, in some instances, both steep and lengthy, and only the fittest walk the course.

Paul has built, in the past, a large reservoir lake, giving him over 10,000,000 cubic metres capacity for his irrigation system, although he stresses that he uses the irrigation sparingly to encourage the finer grasses. The course has a full Toro Trident watering system for greens, tees and fairways. The pump set was upgraded by Irrigation specialists, Topturf Irrigation, several years ago. There are also a number of other small ponds, including the twin waterfall on the spectacular 18th, plus the River Bybrook running through parts of the course.

The underlying soils are quite shallow and stony, thereby making the course very free draining, so some areas of the course are prone to drying out during dry periods. However, this soil type does provide the ideal conditions for many wildflower species, so managing these areas requires not inconsiderable skill and knowledge. Part of this is a cut and collect regime to encourage flowering.

The greens are USGA that have matured over time in terms of quality and performance. Paul has reduced nitrogen inputs dramatically. Where once it was over 250kg, it is now less than 100kg. The aim is to encourage finer grasses and not feed the Poa grass species.

In addition to reducing nitrogen inputs, Paul is currently implementing a Symbio feeding programme on all the greens, using a combination of humic acids and seaweed to aid the establishment of finer grasses. Paul has also begun a programme of oversowing the greens three times a year with a Johnsons All Bent seed mixture at 2-4gm per square metre.

Aeration and topdressing are key activities, with over 200 tonnes of sand being incorporated into the greens during the season on a 'little but often' regime. Aeration is undertaken using a wide selection of solid and hollow tines - hollow tined three times a year, vertidrained twice a year and micro tined on a monthly basis, with regular slitting during the autumn/winter.

Feeding regimes are tailored around the swards needs at various times of the year, using a programme of liquids and granular fertiliser products, along with some organics and amino/humic acids.

The club also use Greensward rollers, rolling a couple of times a week.

Approaches and collars are kept at 10mm, tees and the croquet lawns are mown at 10mm in the summer and 12mm in the winter, with fairways at 15mm and 17mm respectively. Semi rough is kept at 30mm and rough at 50mm

Tees are double-cut two or three times a week and, when required during the year, vertidrained, topdressed and divoted to maintain levels and appearance.

Last winter, Paul renovated a number of bunkers to improve both the look and maintenance capabilities of those around the 2nd, 7th and 9th holes.

Plenty of tree work was completed, thinning out plantations and reducing canopy cover on certain parts of the course. This not only increased air flow but improved the visual appearance of the course.

Paul works closely with local nature groups and conservation trusts, enlisting their help and advice on maintaining scrubland and limestone grasslands. Part of the course is registered as an SSSI, along with tracts of ancient woodland, all of which require appropriate management regimes in place.

Paul's two gardeners - Patrick Kelly and Chris Cowley - are kept busy looking after the formal gardens around the Manor House, along with growing a range of vegetables and fruits for use in the hotel.

The remains of the castle, after which the village is named, are also situated on the site. This ancient monument prevents Paul from carrying out certain types of work, for example drainage and tree planting.

The club are hoping to become an Open qualifying course in the coming years and have recently secured the services of the STRI's, John Lockyer MSc, MBPR, RIPTA, to help evaluate what needs to be done agronomically to improve the condition of the course in terms of sward composition and performance.

Improvements are generally achieved when the level of maintenance inputs are increased along with better monitoring of existing practises. For example, monitoring the level of organic matter content, and ensuring prescribed feeding regimes are not exceeded, will help overcome any problems of blacklayer or hydrophobic issues such as dry patch.

Tweaking the feeding regimes will help the sward retain vigour whilst, at the same time, withstanding the rigours of play.

The overall aim is to refine management practices to encompass little and often regimes that help improve surface playability. For example, by careful use of water and taking regular soil samples to detect moisture content of the profile, Paul will be able to make better judgments about irrigation requirements.

Like most things, it is having the time and resources available to achieve these objectives. The Manor House course presentation is second to none, and is a credit to Paul and his dedicated team. The course is visually stunning and makes the very best use of the natural topography. It requires not inconsiderable talent and commitment to achieve, what is, a golfer's paradise.

John Deere 2243 and 2500A triple mowers for tees, collars and approaches