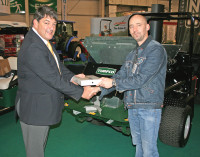 Graeme Lorimer, the course manager at Bishopsbrigg Golf Club on the north eastern outskirts of Glasgow, is the lucky winner of one of the six Apple iPads offered as prizes in Turfco's promotional campaign celebrating 50 years of topdressing. Turfco is marketed across Europe by Ransomes Jacobsen, a Textron Inc. (NYSE: TXT) company.

Turfco, the Minnesota-based manufacturer and inventor of the first mechanised topdresser, have been running the competition since the February 2011. At the end of the year, a Grand Prize Draw will be held with the winner receiving a Turfco WideSpin 1540 EC topdresser, the most advanced material handler of its type available today.

He was presented with his prize by John Quinton, Ransomes Jacobsen's UK and Ireland sales manager, during a visit to IOG Scotsturf early in November.

Commenting after receiving the iPad he said, "I can't believe it; I'm not normally very lucky when I enter competitions, so when I was notified that I'd won, I was absolutely astounded. It's a fabulous prize and was made more special when Scott Kinkead, the executive vice president from Turfco, took the time to phone and congratulate me. I would like to thanks Scott and everyone at Turfco for my prize."

To qualify for the chance to win, Graeme simply registered by completing a short on-line form at http://www.turfco.com/50years/ and was fortunate to be selected in the random draw. The competition runs until the third week of December, so there's still an opportunity to win an iPad and the WideSpin 1540, as long as registration is completed by 23rd December 2011.