A BJD Mud Hog crusher has been installed at leading loams and topdressings producer, GSB Loams Ltd., to help process and blend soils for cricket squares and other sports pitches.

The Northamptonshire company supplies clay-based loams and top dressings, bagged or in bulk, to sporting clubs and local authorities - a loam high in clay is essential for a cricket square as a light soil would simply absorb the force of the ball.

GSB Loams operates on a 7.5 acre site in the village of Great Cransley, near Kettering, and is truly a family business. Originally started by John Goodjohn, his three grandsons Donald, Nick and Miles are now involved in the day-to-day running of the company. At the site, soil sourced from clay-ironstone bearing land is spread on fields and worked on an agricultural basis. It is then left on the fields through the winter, allowing frost to break it down, and in late spring/summer it is disc harrowed and allowed to dry out in the sun. 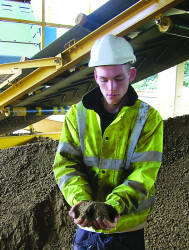 Soils are then processed through the 2420 Mud Hog which is capable of high reduction ratios and handling a high throughput of dry soil, or even wet and sticky material which would choke conventional crushers. John Goodjohn explained: "Introducing the Mud Hog into our process has made an immense difference to throughput; the MUD HOG has an insatiable appetite, giving us improved utilisation of raw materials and producing a much finer product than we could achieve in the past. Also, because the machine has an open base, it is able to blend the loam at the same time as reducing it."

The Mud Hog, developed by BJD Crushers Ltd, is a hammer mill type machine with an independently driven, constantly moving and adjustable breaker plate, replacing the conventional breaker bar and plate arrangement. This arrangement ensures that feed material is continually carried into the path of the hammers, preventing any bridging of the feed opening with a build up of material.