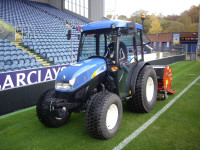 Pitch care at one of the UK's leading premiere football clubs is being brought into the 21st century thanks to specialist equipment and support from New Holland.

The nine-strong team at Blackburn Rovers charged with looking after the hallowed turf, have just invested in a third New Holland tractor, a T3020 supplied by Campey Turf Care Systems, to ensure the ground remains one of the best in the league.

Head groundsman Steve Patrick, who has spent the past 23 years looking after the club's turf, says the new compact tractor will prove invaluable in keeping the grounds in top condition.

"We work our tractors hard because there's a lot of turf to look after - 14 pitches across the training grounds, academy and main ground.

"We invested in a New Holland because the units we currently operate have proven themselves as built to last. In a difficult financial time you need a tractor you know is going to last longer, cost less to run thanks to its reliability, and is still worth something when there are 3,000 hours on the clock."

And the 49-year-old knows a thing or two about groundcare, having entered the industry in the footsteps of his father more than 30 years ago. "I love every minute of working in turfcare - but without the support of New Holland tractors and other equipment such as the verti-drains, fertilisers, and all the components of pitch maintenance, we wouldn't be anywhere. The industry has come a long way in the past 30 years."

Patrick recalls the state of pitches in the 1970s, which he says, "looked like warzones - absolute mudbaths". "Without the technological advancements from New Holland and others, we'd be back in the dark ages when the referee called the groundsman onto the pitch to measure where the penalty spot was with a bucket of white paint because the turf had been torn up."

He says the final decision to continue with New Holland was made when he had the opportunity to trial the tractor.

"It's simple to operate and great to drive. I had the air conditioning on, using the CD/Radio - playing Meatloaf's Bat Out of Hell - and it was an absolute dream to use."

The experienced operator, who drove his first tractor aged six, says the club has enjoyed a long and professional relationship with New Holland.

"We stopped hiring machinery and started investing in our own about 15 years ago, which is when we bought our first New Holland. In the long run the longevity of those compared to others make the brand very good value for money," Patrick says.

"The T3020 will become the 'jack of all trades' together with the existing TC27 and TN90 New Holland machines," he adds.

"There's no doubt it'll be used on a daily basis. The wonderful thing about turf is that it's challenging everyday. When you think it's looking immaculate, you then get another challenge - such as disease - that the groundcare team has to deal with."