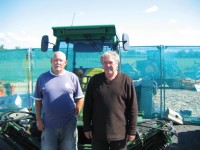 Talking to Willie Black and Mike Blair, you could be forgiven for thinking you had stumbled onto the set of a Two Ronnies sketch - remember the country yokels leaning on a farm gate? For both have rural accents of mixed pedigree - Willie's originating in Tadley, Berkshire but fused with a smattering of Dorset and Somerset from his time as a publican in Bridport, Chideock and Bridgwater, and Mike's from being brought up in Nailsea, Gloucestershire and spending much of his time living and working in Somerset.

But, any resemblance to the Two Ronnies yokels ends there, for these are two very successful businessmen, one of whom has embarked on an ambitious project to provide a sports and leisure complex in rural Somerset.

The seeds of the idea were sown some four years ago, after Willie had suffered two bouts of pneumonia within two months, which almost saw him "pop his clogs".

"During my convalescence I was climbing the walls" said Willie, "and I said to the wife that I can't just sit here all day doing nothing. I had always been so active. So, I bought a copy of the Farmers Weekly and spotted an advert offering a plot of land, forty-five acres in total, of which nineteen had planning permission for sports pitches and a leisure centre."

Within a few months Willie had purchased the land, at Henstridge Marsh on the Somerset/Dorset border, via auction and set about his plans to build Henstridge Sports and Leisure Club. He had always hankered after designing and building his own golf course, and the twenty-six acres without planning permission seemed the ideal location to fulfil his dream. South Somerset Council eventually granted him planning permission and so, armed with a secondhand digger, dumper truck and rough plans scribbled on paper, he set about sculpting the land. 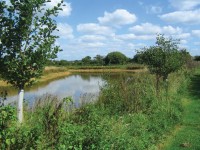 The first task was to create water hazards, with one additional lake provided for fishing. As you might imagine, Henstridge Marsh is low lying and the indigenous underlying clay soil provided the ideal watertight base for all this work. All the topsoil removed was used to build tees and greens. In an effort to reduce the problems of flooding, six of the nine greens are raised, and a series of ditches now criss-cross the course to assist with drainage, whilst adding further hazards!

Over five hundred trees have been planted - mainly oak, ash and beech - with alders planted along water margins. A further one hundred trees are due to be planted before the onset of winter. These will include leylandii and laurels to create both visual references and obstacles on, what is, a very flat piece of land.

In most instances the native meadow grass was mown down to create the fairways, whilst the tees and greens were sown with a seed mixture recommended by a local supplier.

As the course bedded in, the whole lot was mown with gang mowers to keep the grass down, whilst the wet summers of 2008 and 2009 filled the lakes naturally. Most are to a depth of five feet and all have been stocked with carp, tench and roach. There is, reputedly, a 17lb carp in the fishing lake and, during my visit, one young lad appeared to have hooked it. Sadly, it got away, but photos pinned to the notice board in the clubhouse are testament to the good fishing to be had. 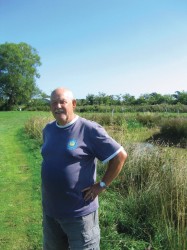 Wetland grass areas abound on the course and around the perimeter, and these will be managed to attract wildlife, although the herons and cormorants that are now visiting the lakes are most unwelcome!

At this point in time all the work was being undertaken by Willie, with a few locals helping out on odd occasions. However, a chance meeting in a pub (where else!) with Mike Blair has seen things move on apace.

Many of you will know Mike from Rochford Garden Machinery, the local John Deere dealer, where he worked for over twenty-five years, the last eight as sales director. He was often to be found manning stands at Saltex and Harrogate. Mike was due to take retirement in December 2009 and, during his chat with Willie, offered to help out, part-time. He also offered to help source secondhand machinery, something he was more than able to do with all his contacts in the industry.

Fast forward to summer 2010 and Mike has been working full time on the course for eight months!

"I've spent all my life selling high quality turf maintenance machinery to greenkeepers and groundsmen" said Mike, "but I knew very little about looking after greens, so this has been a rewarding challenge. Because Willie had only been keeping the grass down, there was no shape or definition to the course and this was one of the first tasks I undertook. I mowed all the greens, initially, with a Hayter Harrier to strengthen up the grass. Remember, the course was not yet open at this time. Once I was happy with the health of the grass I brought in my old seven blade Ransomes Meteor - you don't see many of those around now - to get the grass down to a decent height and start striping up." As an aside, Mike tells me that he swapped his push bike for the Meteor! 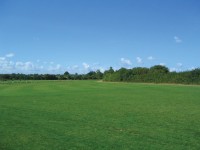 It is typical of the man. For over twenty years he was volunteer groundsman at nearby Henstridge cricket club, where he was also captain and chairman. In that time he would often use his own equipment, whilst also sourcing other machinery at next to no cost.

"Giving definition to the course has been immensely rewarding," he says. Fairways are mown with a John Deere 3235 or a Roberine 1900. These are part of a growing stable of secondhand machinery that have been sourced by Mike and Willie. "I'm particularly pleased with the Jacobsen Greensking 6 we bought recently," says Mike and, you guess, from the smile on his face, that it was for 'silly money'.

The course eventually opened in July of this year, and a steady stream of golfers are discovering the pleasures of this little nine hole course. There are six par 3s, the shortest at 72 yards over water, and the longest at 175 yards. These are complemented by three par 4s, the longest being 301 yards. All have names that reflect the abundance of wildlife on the course, Otters Ditch, Deer Leap and Rising Teal being examples. 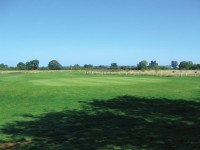 "I am only mowing the greens down to 6mm at the moment, because I don't want to stress the grass; it's been a difficult summer for it weather wise. I'll go lower next year," Mike states. "I'm carrying out a programme of aeration, scarifying, topdressing and overseeding with Johnsons Sauvignon to improve the grass species."

"We are hoping to run a few competitions in due course, so we've bought a John Deere 220 pedestrian greens mower, secondhand of course, to help with presentation."

With Mike now looking after the golf course full time, Willie is able to move on to other projects. A ten bay driving range is prepared, ready for seeding. For the moment this will be open to the elements but, eventually, "the bays will be under cover," says Willie.

A nine hole putting green for family use is also ready to be seeded out, as is the practice putting area for golfers. These will all be ready "sometime next summer" states Willie. 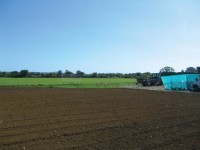 Next on the list is a full size bowling green. This, Willie expects, will be open for use by the 2012 season. He's also currently levelling the car park area, and covering with scalpings, to accommodate one hundred and fifty cars, one of the conditions of the planning permission.

The football pitch, which was already on site, is now attracting local teams of both the league and 'pub' variety and, true to form, to mow it, Willie has just bought a 1995 Ransomes 305 at auction for a snip because it kept overheating. "I knew what was wrong with it straightaway," said Willie. "It's got a 1.9 VW engine, so I took it to the local car mechanic, who put it right for £200. My diagnosis of a cracked head was correct," he says with a grin.

"It's how we have to operate" he says. "There is no way that we could afford new machinery, so we will have to source good quality secondhand models. This is where Mike's experience and contacts has proved invaluable."

The clubhouse has been refurbished in similar fashion. The existing building was, in Willie's words, dilapidated. From the outside it looks somewhat modest but, once inside, is decked out with smart tables, dining chairs, bar stools, leather sofas and easy chairs. And where did they come from? "Hotels and pubs that were either being refurbished or closing down," says Willie. The bar was built by Willie, and the fixtures and fittings - fridges, beer taps, etc. - were all purchased at auction.

"The eventual plan is to provide a complex where families can come and enjoy a wide range of sports and leisure activities in a congenial atmosphere," says Willie. "We plan to have picnic areas close to the fishing lake and, in time, would like to welcome touring caravans. I think that would be a huge draw to golfers, anglers and families alike." 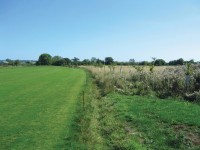 This is an ambitious project on a number of counts, not least that the catchment area is just a couple of small market towns and a few villages. In addition, there are a number of established eighteen hole courses locally. And, finally, this is a huge self-build project being carried out with little previous knowledge.

It is, however, a project that is slowly capturing the imagination of the locals and, if the golf course is anything to by, one that will reward them with pretty decent facilities in a couple of years time.

As Mike drives me back to the clubhouse on the secondhand (obviously) John Deere Gator, we disturb a huge flock of finches enjoying a meal of thistle heads. This complex has a heck of a lot in its favour already.

And, it's goodnight from him!