Blackwell Golf club was formed in 1893 as a nine-hole course on part of the Lord Hewell Estate, Bromsgrove, Worcestershire. It was extended to eighteen holes in 1923, transforming it into a small parkland 6260 yard par 70 course. Even though the course is short it is very demanding with tight tree lined fairways and 80 testing bunkers with one, on the 12th hole, that stretches for over 200 yards and is one of the longest bunkers in golf.

During the 1990's Blackwell played host as a regional qualifying course for the Open on six occasions. The club is proud to have had three English Amateur Champions as members during the last 70 years. The club has a relative small membership, by choice, of approximately 200.

Members can generally turn up at any time of the day and tee off without having to wait for any length of time. However the club does not allow any early morning tee times, members are not allowed to tee off until 8.30 am except for events like the Club Championship etc. This is a bonus for the greenkeeping staff, enabling them to get off to a uninterrupted start to their day.

Tony Smith is the longest serving employee with over 29 years service, and not only carries out greenkeeping duties but is also responsible for maintaining all the equipment at the course. The remaining staff, Andrew Alcock, Gareth Dennet and Adam Moss, are relative new comers having joined the club within the last two years.

Whilst walking around the course, I couldn't help noticing how quiet it was with very few players out. Peter pointed out the famous 12th hole bunker that stretches well over 200 yards down the length of the fairway. Many of the bunkers tended to be quite small but with steep bunker faces, providing tricky hazards for both the golf members and staff alike. Bunker maintenance is very labour intensive, with all bunkers having to be raked by hand and the grass surrounds being cut with flymowers and strimmers. The bunkers are generally raked six times a week during the summer months, but will receive added attention if required. The sand is a Leighton Buzzard white sand.

The course drains very well, due to its free natural soil draining properties. The course is established on predominantly sandy loam soil, and there are very few installed drainage systems. The course prides itself on its manicured look with very well cut greens, tees, fairways and green surrounds. Peter has an array of grass cutting machinery available and is currently maintaining his sward heights as follows:

Some of the fairways are ridged and furrowed as a result of old agricultural farming practices in days gone by. To overcome dry patches forming on the ridges, Peter uses wetting agents, spraying with aquazorb on all fairways.

Fairways are heavily tree lined with a variety of tree species both ornamental and native, ensuring plenty of variety, colour and form being seen all year round. The trees are one of the main attractions of this course. The sheer number of trees inevitably means a lot of winter work for the staff, starting with leaf clearance during late October and November. The majority of the leaves are cleaned up with a large leaf collector, a Wessex brush/collector). Tree pruning and felling reduce canopy sizes or thin out some of the plantations. This type of work helps maintain healthy trees and prevents excessive shade on tees and greens.

The course has a thirty-year-old TORO irrigation system which currently only provides automated watering for the greens and manual points for the tees. The system is set to water each

Aeration is an important part of the maintenance regime at Blackwell, especially having pushed up soil greens and agricultural soil fairways. The club has it's own machine which gives them the flexibility to vertidrain whenever they like, often fitting in with other maintenance regimes and during optimum soil conditions. The fairways are vertidrained using 25 x 300mm solid tines. The greens and tees receive fortnightly aeration using a John Deere aercore with star tines, usually followed by scarification with thatch-away units in one or two directions. This operation helps restore levels.

The greens have usual spring and autumn maintenance programmes of aeration, scarification, feeding and topdressing with Ruffords No 3 or 1742 rootzone materials.

The course is high above sea level and experiences low air temperatures, especially at the start of the season, which often affects the rate of grass growth. In most years it is not until the end of May that grass growth is back to normal. Frosts can also be heavy due to extent of the shading caused by the trees.

Each year Peter has two visits from Jeff Parris of the STRI, who has been advising Blackwell for a number of years, taking soil samples from greens tees and fairways. The information about the condition of the course ensures that the correct balance of feeding, top dressing and maintenance is undertaken.

Peter starts his autumn renovation quite early, in the first two weeks of august, which enables him to establish plenty of new grass growth on the greens before the soil temperatures change. The programme begins with vertidrain aeration work on the greens using 18x 225mm tines followed by scarifying, top dressing and overseeding using a Johnsons Green master grass seed mixture.

Disease at the course this year has been limited to an outbreak of fusarium in May which was treated with Vitax Insignia. Some red thread appeared on the fairways late on in last year with some outbreaks of anthracnose in the winter.

Peter's main aim for June is to ensure that all presentation maintenance is completed and the greens are beginning to get some consistency. Peter uses a stimpmeter to check the uniformity of his greens.

The course has a number of public footpaths running through it, which does invite a number of locals to walk their dogs. Fortunately, vandalism is very limited with the odd flag and tee marker going missing.

Peter, as with most greenkeepers, continually tries to keep up with changes in technology and new products by attending relevant seminars and training days. He is currently looking to upgrade and buy new fairway mowers to replace the old Ransome machine. The reward will be that Peter can continue to raise the standards and quality of the Blackwell Golf course.

Card for the course: 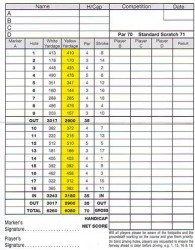