0 BLEC celebrates US golf show success with sales and demos 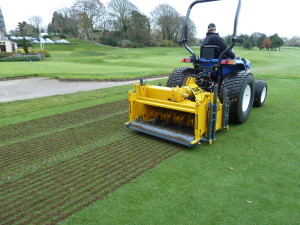 BLEC Global had an "excellent" US Golf Industry Show (GIS) where they took several orders and arranged demonstrations across the States.

"This was one of our most successful American shows," says Gary Mumby, managing director of BLEC Global, who had two machines on their stand at the show in Orlando, Florida.

On the stand were the universally popular Multivator - which decompacts and recycles rootzone material in one pass - and the Blecavator, a tried and trusted tractor-mounted cultivator for preparing seedbeds.

"As well as securing orders for several machines we were delighted to meet potential clients from across the world, including New Zealand, Scandinavia, Asia and Europe," says Gary.

He and wife Sue, together with daughter Tracey, had a hectic two days at the show, meeting existing customers and arranging demonstrations - both in the US and around the world.

"While we only had two machines on the stand," says Gary, "we were able to promote our other specialist golf and sportsturf machines including the BLEC laser grader, power box rakes and new close-spaced golf greens overseeder launched at BTME."