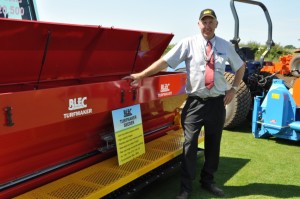 The new machine adds a vibrating soil screener to the process to ensure soil is sifted before the stoneburier goes into action.

Results have been outstanding with superior soil finish when preparing large areas for turf cultivation.

"Visitors were impressed with the heavy-duty build of the Vibra-Screen," says BLEC managing director Gary Mumby.
"It gives turf growers an extra tool as part of one machine when preparing ground prior to sowing seed for turf cultivation."

"The Turf Show was excellent for us," says Gary. "We have arranged demos to a number of visitors to the stand and made very useful new contacts."

More than 250 turf industry visitors were at the show, which had 23 exhibitors and was held at Simon Hutton's Fineturf HQ just outside Grantham in Lincolnshire.