Gary Mumby, managing director of BLEC, reports optimism for the year ahead with sales of four machines at BTME, Harrogate, and an increase in exports.

"Harrogate was a good show for us with sales of four machines including the Rotorake, Turfmaker Seeder and Laser Grader," said Gary, prior to leaving for America and the GCSAA show in February.

"Exports account for 60 per cent of our business and the current exchange rate is proving excellent for us, taking us into new territories including Eastern Europe.

"We rely on shows like BTME and IOG SALTEX for exposure. They are very important to us and can reach an international audience. Our equipment is particularly aimed at contractors and we are always pleased to see them on our stands.

"The American show is important because it does attract a massive audience from across the States and the rest of the world."

Gary, who launched BLEC (now BLEC GLOBAL) in 1986 with wife Sue, was previously a landscaper who realised he could design and manufacture specialist machines for the grounds care industry.

Their factory near Peterborough employs around 25 people and the machinery is all British manufactured. 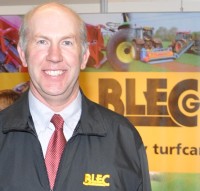 At Harrogate they launched the new BLEC MULTIVATOR, with a quick hook-up rear attachment system which turns the Multivator into a multi-use machine carrying out a wide range of tasks achieved with only one drive unit.

There are five models available in different widths - three for mid-range tractors and two heavy duty for higher HP tractors. All units are equipped with overload cam clutch and the heavy duty models also feature long-life side gear drive with forward and reverse rotation.

The heavy duty units also feature a heavy duty gearbox with four shafts to give two-speed drive and reverse rotation - mounted on a swivel base for easy drive change. On the heavy duty models a PTO shaft drive is fitted for rear attachments and an extreme duty overload clutch (pre-set).

Other popular BLEC machines include the Disc Seeder and Multispike Seeder.