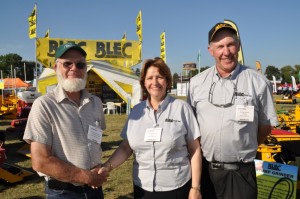 Blec global's stand at Windsor was a hive of activity during the show as blisteringly hot weather brought out machinery buyers.
Showing a wider range of products for the groundcare, landscaping and sportsturf marketplace, managing director Gary Mumby reported sales success.

"This was an excellent show for us this year," says Gary. "We sold several power box rakes, a cultipack seeder and took enquiries on a number of machines.

"With exports 60 per cent of our business, it was great to see foreign visitors on the stand - and we had a visit from our Canadian distributor, George Bannerman of Sportsturf Magic."

George said: "The show ais excellent and we were delighted to be supporting Gary and the BLEC team together with Blades Machinery, who import our pedestrian machinery into the UK."

Two models of the BLEC Multivator, both heavy duty and compact, were on show - and demonstrated - as well as the new BLEC Power Box Rake powered by the 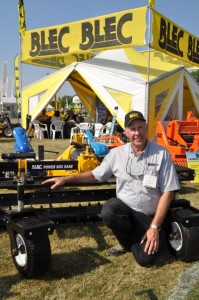 Also on the stand was the BLEC Power Box Rake heavy duty version for tractors - cultivating, pulverising, earth moving, grading and stonepicking all in one tough machine for landscapers. Optional laser control kits are available for more accurate levelling.

The Disc Seeder (heavy duty), Multi-Seeder, Cultipack Seeder and Star Seeder were all on show.
Contractors were particularly interested in the BLEC Laser Grader, which is an essential tool for levelling and grading golf tees that need renovating.

Speedcut Contractors managing director Dick Franklin, who bought a John Deere 5100M tractor off the Farol stand, said the BLEC Laser Grader was one of their most important pieces of kit.

Says Gary Mumby: "The show is very important for us where we get the chance to demonstrate all our innovations for turf and landscaping professionals."

He announced that BLEC Global were considering organising a series of roadshows around the UK in 2014. For more information visit: www.blec.co.uk