0 BLEC reports successful Saltex with machine sales off the stand

Gary Mumby, managing director of BLEC reported a "very successful Saltex" and an excellent business year with turnover growth of 10 per cent compared to last year.

"Windsor was a terrific show for us and we sold eight machines from the stand and took a large number of solid inquiries," he said. "With exports 50 per cent of our business, we have been delighted with this year's overall business results.

"Thirty per cent of this business has been within Europe and 20 per cent outside, including the US. The reason for this has been the currency exchange rate which has made buying British machines very economical in the current climate."

At the show they sold eight machines including a new Shakervator, a new Stumpgrinder, a BLEC Laser Grader and a Blecavator.
Gary launched BLEC (now BLEC GLOBAL) in 1986 with wife Sue. Previously a landscaper, he realised he could design and manufacture specialist machines for the grounds care industry. 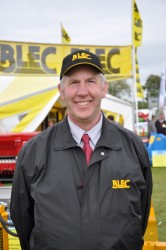 Their factory near Peterborough employs around 25 people and most of the machinery is British manufactured.

As well as their HQ in Peterborough, BLEC has a new US distribution unit in Florida, previously located in South Carolina.

"We have set up a new operating centre in Florida supplying our existing British-manufactured landscaping and turfcare equipment and parts, " says Gary. "Machine and parts travel from the UK to Nigel Mills of Greenworld Equipment Inc. who is managing the new site."

Among other products at SALTEX were two machines launched earlier this year:

*The BLEC Multivator is a multi-use machine carrying out a wide range of tasks achieved with only one drive unit - decompacting, soil recycling and topdressing all in one pass.

*The GKB Sandfiller is a tractor-mounted scarifier and sandslitter which removes and collects spoil and fills grooves with sand in one pass.