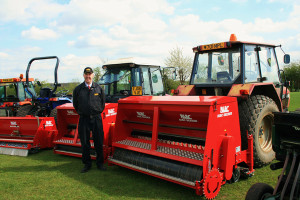 The BLEC machines were up against rival manufacturers for the trials organised by Pitchcare.com.

Head groundsman Chris Parry and his staff tested the machines during a week which culminated in an open day for groundsmen and greenkeepers.

"We were delighted to have the opportunity to pit our machines against others and to show how well they perform," said BLEC Global managing director Gary Mumby.

And two BLEC Multiseeders were on display - the Mark One 2.2metre, with twin spikes front and rear, and the Mark Two 1.4metre with spike rollers front and smooth roller to rear.

Following the final demo day, the 1.4 disc seeder was delivered to a contractor in the Midlands, after a confirmed purchase the same week.

A 2.2metre seeder has also been bought by Bancroft Amenities - the eighth BLEC machine in the Bancroft fleet, which has been used in a project on the Old Trafford cricket ground in Manchester where the company is based.

At BTME in January BLEC launched a new golf greens overseeder with 26mm spacings - the closest of any in the BLEC stable of seeders.