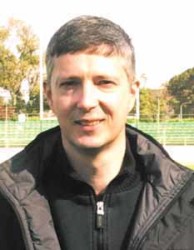 Now that I'm fast approaching the halfway point of middle age, I know full well that if you don't give your body some sort of half decent maintenance routine it all starts to go a bit out of shape, and looks nothing like it did ten years ago.

Plus the performance characteristics are somewhat distant from the high performance statistics that could be boasted ten years earlier; sub four minute miles can now only be accomplished by car; the gazelle like speed and agility has been replaced with that of a sloth, and the only burpees (known as 'squat thrusts' to gentlemen of a certain age) achieved are the variety that comes from drinking too fast or, more usually, after a few gulps of a favourite fizzy drink.

Artificial playing surfaces suffer the same embarrassing scraggly appearance and loss of performance as they age, that is, if they have not had a reasonable maintenance regime carried out on them. Even when maintenance regimes are adhered to, things can still sag, wobble and get clogged up, to the point where intervention by a specialist is necessary to achieve the surface required.

A common problem with older, sand filled artificial surfaces is the build-up of contamination within the sand infill itself, which chokes the sand by filling up and obstructing the pore spaces and pathways that are needed for effective infiltration of surface water through the infill and into the drainage system.

The contamination can include, amongst others, leaf litter from surrounding trees and shrubs, soil and stones that have been walked on to the surface, moss and algal growth, guano (bird poo), chewing gum and even flaky skin cells and hair. Routine and regular maintenance will slow down the rate at which the contamination builds up and, if the ideal maintenance regime is carried out from day one, the almost elimination of any infill remediation at a later date.

In a nutshell, this is the removal of old contaminated infill, and the introduction of new clean infill. Usually this takes place on surfaces that are between five and eight years old, although the time interval depends on the quality and quantity of the maintenance that has been carried out.

Interestingly, I'm not often asked "how can you tell the sand infill needs replacing?" It's a good question and one that should always be asked, as more questions and scrutiny help develop rigour and best practice. Not asking a company how and why they do things may mean that the wool is being pulled firmly over your eyes, and that you are possibly just about to pay for a service you don't need.

How is the contamination level assessed, and how much is a bad thing?

Well firstly, to put the cat amongst the pigeons, it's near impossible to determine the level of contamination without physically measuring it. All too often, company representatives will turn up and make an assessment by dragging a foot across the surface, or maybe even getting a finger tip dirty by touching the carpet; it's akin to kicking a car wheel to measure its air pressure.

If you are really lucky, they may prod or scrape the surface with a screwdriver or some sort of tine, ultimately, however, they will then say "this needs replacing, it's too contaminated". This is an example of a subjective assessment; the finger in the air variant or, should I say, finger on the ground.

True, there are degrees of subjectivity. For instance, if it is black and slimy with gloop floating on top, then yes, you can be pretty confident that the infill is contaminated and that a test isn't really necessary. If, on the other hand, you remove a sample of infill and rub it between your fingers and it stains your fingers or feels slippery, it is probably contaminated, but by how much?

If you leap onto the internet or delve through your local library you will find a small body of research on sand infill contamination. Eventually, you will find this golden nugget "The effect of particulate contamination on the infiltration rates of synthetic turf surfaces" by Dr Andy McLeod and Dr Iain James. In their research they found that infiltration rates are significantly reduced when contamination levels are greater than 10% (by volume). So that answers the question of how much contamination is a bad thing; 10% contamination is the threshold value at which surface drainage starts to go pear shaped. The next question to tackle is how do you measure it?

Forget the glitz and glamour of the corporate look, or the overwhelming overload of useless information that comes with many a slick company representative. To test the contamination level requires the representative to roll up their sleeves and get their hands dirty, which is probably why testing of this type - or any type for that matter - doesn't happen very often. Why do something practical and objective, when subjective bull will secure a sale or contract?

To objectively measure the level of contamination in the infill requires a simple sedimentation test, as refined by Drs. McLeod and James. This is where a representative sample of the surfaces infill is removed and mixed with some water and a dispersal agent in a tall transparent cylinder receptacle; the mixture is agitated and then left to settle. 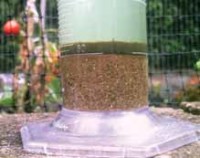 The heavier mineral component of the infill (the sand) will settle first, and the lighter contamination - the bird poo, the skin flakes, and the algae - will, eventually, settle on top of the sand, leaving two distinct layers of infill.

Measuring multiple samples from across the whole playing area will give a more accurate view of the contamination levels. The necessity for infill remediation by a specialist company will be dictated by the highest level of contamination found; the key is identifying the worst area, which is usually adjacent to the entrance point, or a high wear area such as a goal mouth or base line.

I would be shot by my bosses if I didn't abuse your attention at this point by stating that Sweepfast Ltd sells a competitively priced sand infill testing kit, with all the bits and bobs you need to determine the level of contamination in your own infill. Determination of the level of contamination through objective testing of this kind provides you with knowledge which, in turn, informs the maintenance operations required.

When it is time to call in the specialists to give the sand infill a new lease of life, you may want to know what to expect.

Essentially, there are two main methods of extracting the old infill from the artificial carpet; compressed air, whereby the infill is blasted out of the carpet pile: and high pressure water, which blasts out the infill from the carpet, but also washes the carpet itself and clears the drainage holes at the same time.

Some research into the maintenance of sand filled artificial surfaces was undertaken a few years ago, the results of which were published in September 2008. Some company representatives (the non-water jetting type) are all too quick to refer to this research, as it states that "air jetting and water jetting are equally effective on short pile carpets, but water jetting is not as effective on long pile carpets as air jetting".

I wouldn't say that the people quoting this statement are incorrect, or that they are bending the truth, because it is a published fact. Perhaps it would be more prudent to say that they are a little bit behind the times or out of date because, when you look back at when the tests were carried out, some five or more years ago, you will appreciate that technology has moved along since then. The water jetting of five years ago barely resembles the water jetting of today. Perchance someone will sponsor some more research on the new improved techniques available?

So, those are the two main methods to expect, air jetting and water jetting ... and water jetting with high air flow!! Just like a scene from Monty Python's Spanish Inquisition I have just remembered that there is another technique. So, there are three main techniques for extracting sand infill, and the third may be the best yet; a high pressure water jet system with [non-compressed] high pressure air flow.

Clean infill will improve the rate at which water is cleared from the surface, allowing a quicker resumption for the playing of sport after rainfall and, therefore, it could be argued that cleaner infill extends the useful life of the carpet. However, this does not take into account the effects of compaction on the infill and, subsequently, the infiltration rate of the playing surface, but that is a story for another day.