0 Blot on the Landscape!

"There was one session when it was so dark that I thought the world was coming to an end. I thought the Lord had turned the lights out."

The wettest May and June on record and one of our county cricket grounds did not lose a single game during that time. Hard to believe, I know, but that is the proud record of Edgbaston, the home of Warwickshire County Cricket Club.

True, they did not suffer the deluges of near neighbours Worcestershire but, nonetheless, there was an awful lot of water dropped on middle England. According to Head Groundsman, Steve Rouse, they had 100mm of rain in May, with 50mm the following month.

So, how did they manage to get all their games on?

"Well, we had a magnificent start to the season, March and April were fabulous," said Steve. "But all the lads who have been around for a long time were saying we're going to pay for this - and we certainly have!"

"Fortunately, we've got these covers from TTS, they're 100ft x 100ft, really big covers; when the lads are pulling them off and they're full of water they are hard work, I can tell you, but they've saved us a lot of cricket."

"The only cricket we've lost has been towards the end of the day when it has been raining continuously, but nobody plays then. No, we haven't lost an hour, which is incredible really." 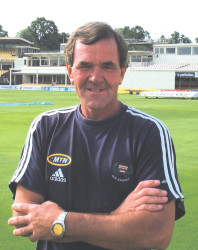 In addition to the covers, Steve's other line of defence against the downpours is his fleet of motorised blotters. "They're worth their weight in gold," he continued. "We've got two sit on blotters of our own, they are magnificent things, they really are. During the one-day international we had four of them in total, we hired in two more. The night before was so dire, we had the lads in at 4.00am, there was water lying on the outfield, but the game started right on time at 10.45am, it was unbelievable."

Steve is quick to praise the commitment and skill of his team, "With these blotters, we can clear the outfield of any lying water within an hour. That's how good they are.

We've been very, very fortunate, but it's also due to the skill of the lads who use these machines; they're very difficult to move and, in small spaces, you need a very good operator to use them. These lads are bloody brilliant, I tell you, they've saved us a fortune."

However, despite his obvious pride at his club's achievements, Steve is nonetheless perturbed at the way cricket is going. "The major problem at the moment is that there is far too much cricket, and not enough preparation time. Nowhere near enough preparation time," he says. "For example, we have a four day county game starting this coming Friday, but we have 600 kids using the outfield today, so we can't take any machines out there because of health and safety. Tomorrow, we have something called 'run for home', again on the outfield, so the first time we can get on there for a cutting is Wednesday, and the forecast for then isn't great."

"After the four dayer, which finishes on Monday, we have the 20:20 quarter finals on the following Wednesday. In total, I've lost two days preparation this week and with the four dayer I won't be able to work on the Wednesday wicket until the day before, so that will probably be underprepared."

Steve is equally as concerned about the impact on his team and the unreasonable demands the schedules are having on their time. "The day/nighters are becoming more popular, but they don't finish until 10.30pm, then you're tidying up, getting the Sky cables out, so it's generally 12.15am before we leave. The lads are then back in at 7.00am to start prepping for the next fixture."

At the beginning of July, after an England game followed by a 20:20 against Worcester, Steve kindly gave his team a rare weekend off. "They'd gone," he admitted. "They were shouting 'roll on Monday 17th September', they're already counting the days."

Come the end of the season, however, there is still plenty of work to be done, "We're going to take out an old wicket that we've been having trouble with; it hasn't settled down over the last six or seven years; so we'll whip it out, we should get it done in a day. The field is going to be totally scarified, deep slitted, vertidrained, re-seeded and topdressed with a 70:30. That will take us about a week, then we have all the practice grounds to do as well. Hopefully, by middle/end of October we'll have the lot done."

Feet up then for Steve, with another trip to his favourite haunt in South Africa? "Yes, we hope to get away for a while, so that I can get to know the missus again, but this winter I'll be back working in the club's coaching school with the kids. It's something I've been doing for forty odd years." He then added, "But, it is my intention to retire to Cape Town, I just love the place. We'll spend seven months over there and five in England, and not have to suffer another winter ever again!"

After the lifetime of service that Steve has given to Warwickshire CCC, as a player and as a Groundsman, who's to say he hasn't deserved his time in the sunshine.

PS - There's an update to this article, and a very important one. The above interview with Steve took place just before Warwickshire's four day championship game against Lancashire, commencing on Friday 13th July.

Yes, Friday 13th! Steve takes up the story, "The day before was really nice, everything was prepped up ready to start on time. On the Friday it was raining and there was some water lying on the outfield, so we sent the blotters out just to get that surface water off. But, it just carried on raining and the day's play was eventually called off around 4.00pm. There was no way the players were going to get out there. So, after me bragging about not losing a day's play this season, we lose our first one on Friday 13th! "

And there's more. "We got in early on the Saturday morning, about 5.30am, took the covers off, blotted them, and the game started on time. We got the whole day in, even though it was wet outside the covers. We had a bit of rain during Saturday night, but then it started again on the Sunday morning. I've never seen anything like it, in fact there was one session when it was so dark that I thought the world was coming to an end. I thought the Lord had turned the lights out. And, for the first time ever in my experience, the day's play was called off before the official start time.

It's never happened to me in all my years as a Groundsman or a player. Water was lying everywhere, the whole place was just under water. We looked at the forecast, checked with the various weather services, and agreed that there was no point in hanging around. It was the most sensible thing to do."

PPS - Friday 13th July was also the day when our editor, Laurence Gale, visited Steve at Edgbaston to get some photos of the blotters in action. This coincidence did not pass unnoticed by Steve - "It was the worst weekend I've ever experienced in all my years as a Groundsman. In the past we've had many a Friday 13th during the season, and we've also had various visits from Laurence; but we've never had both on the same day."