0 Blues sign up TORO for City of Manchester Stadium

Blues sign up TORO for City of Manchester Stadium 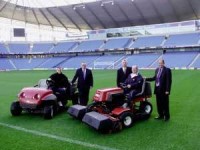 The club and the turf machinery manufacturer have signed a five-year deal that will see the exclusive use of Toro equipment at Man. City.

City's head groundsman Roy Rigby said: "We used Toro machinery very successfully at Maine Road, but never had an official agreement. With the move to the new stadium, we wanted to make a longer-term commitment to Toro, to cement our relationship, because their machinery is good quality and complements our turf maintenance programme."

As part of the deal, Roy's new equipment includes the highly rated Toro Reelmaster 2000-D mower, hailed as one of the most economical trim mowers on the market. City is also one of the first in the UK to take delivery of the new electric Workman 2100E utility vehicle.

City has used a Desso system at the new stadium to create a high-quality, hard-wearing surface that will look its best at all times and last throughout the season. But, as Roy explained, this can pose problems if the right equipment is not used: "Many stadiums which have Desso suffer from a hard, compacted pitch, caused by using heavy machinery. This is why we chose the Reelmaster 2000-D. It's light in weight, so the turf stays soft, which is the way players like it. And it's a fast worker, too, so we can cut the grass in double-quick time."

Roy uses the Workman vehicle for general duties around the stadium such as collecting grass clippings and for transportation. "It's quiet, economical and of course being electric it's environmentally friendly. A great workhorse."

Toro dealer Cheshire Turf Machinery looks after all Roy's needs locally, giving a high-level service. "I have complete confidence in them. They're reliable and respond quickly to my needs," he said.