Bolton Wanderers has completed a major upgrade of its irrigation systems at its iconic Macron Stadium and the club's training academy.

Grounds manager Richard Norton has worked with Simon Rowe of Simon Rowe Irrigation since the new stadium opened 15 years ago and together they have gradually updated the irrigation systems and sprinkler heads at both sites to be 100 percent Toro. 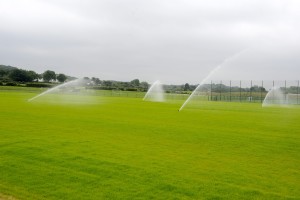 The final stage of the process was completed with the installation of Toro DT55 and T7 sprinklers at the training academy. Richard had been impressed with the overall performance of the main stadium irrigation, especially the new Toro TS90 centre sprinklers, and asked Simon to recreate the same effect for the training academy with work to coincide with annual maintenance.

Sixteen Toro DT55 electric valve-in-heads (EVIH) sprinklers were installed at the academy for the surrounds and eight T7 full-circle in-pitch heads with sod cups for the centres.

Simon says: "I recommended the combination of the Toro DT55 and T7 because together they are a great option for sport pitches, whether it's a match pitch or training academy."

For Richard, the results have been pleasing. "I have noticed there is a particularly nice spread on both these sprinklers," he says, "and the rest of the team rates them, too, which is always good to hear."

His T7 Series sprinklers are designed to provide maximum watering efficiency and precision. High-efficiency nozzles deliver both precise watering and a long throw. In particular, a single port design ensures water is evenly distributed across the spray pattern without putting too much near the head, which can otherwise wash away seed. It's something that was especially beneficial for the academy pitches, which were reseeded as part of the annual maintenance work.

The DT55 units used by Richard are Toro's dual-trajectory sprinkler model. It provides a 15- or 25-degree arc setting, with a simple turn of the main nozzle, and full- and part-circle watering. Richard uses two settings for his needs - half-circle or 180 degrees on the touchline and quarter-circle or 90 degrees in the corners.