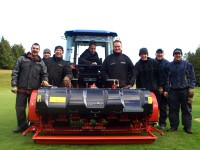 Course Manager at Bonnyton Golf Club, Ross Monaghan, has been a keen advocate of Terra Spikes for over a decade.

In 2001, he was among the first in Britain to purchase the Greens Terra Spike, which introduced central heave and central depth functions to Wiedenmann aeration. Five years later when the Terra Spike XF was launched, he again snapped up one of the introductory machines, his Glasgow south course having a requirement for an extra fast aerator that could cover ground quickly on hard fairways.

With its robust but light frame the Greens Terra Spike was ideal for work on tees and greens and even now it still remains popular, selling well as Wiedenmann's entry level deep spiker. However for Ross Monagahan and his seven man team, the GXi8 HD had caught their attention.

He said: "When we decided to upgrade our system we demonstrated other manufacturers' machines as well. The hard facts were we were looking for an aerator with a fast top speed, consistently good depth, and a combination of excellent performance and precision. We also had to get good value for money."

"For us the GXi8 HD had it all, even down to its 1.8m width complementing the wide tractor tyres of our Iseki TG5470. It offers a natural progression in Wiedenmann engineering with smooth effortless action. It moves better, there are less lubrication points making it easy to maintain and for the team, it's straightforward to operate, not complicated at all."

As part of the decision making process Wiedenmann's Area Sales Manager, Mike James, brought along three aerators to the East Renfrewshire course: the XP6, XP8 and the GXi8 HD.

Mike James says: "For me it was all about finding the right machine for Bonnyton Golf Club. Each of the machines demonstrated would do a thorough job but the GXI 8HD ticked all the boxes. Bonnyton is a great looking course built on high ground with rocky terrain that boasts its fair share of undulations. Ultimately it came down to what best suited the ground conditions, the tractor and the fact that the new aeration programme required speed for regular use on the greens. The GXi8 HD left an immaculate finish on the fine turf and it has the ability to work on other areas of the course to increase productivity."

The XF will continue to be used on Bonnyton's fairways with the GXi8 HD operating everywhere else. Together the machines allow Ross to aerate the whole course quickly and regularly, taking the standards of his aeration programme to a new level.

For more information please contact press@wiedenmann.co.uk or
Val Graham on 0141 586 6789