THE BORDERS PITCH FOR HEINEKEN CUP

Scottish Rugby's newest professionals, The Borders, with an international quality pitch for their first season, have qualified for next year's Heineken Cup. 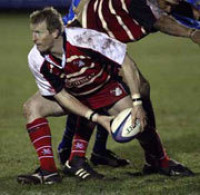 "We got to the second round of the European Parker Pen competition, by beating Madrid earlier in the season," he says, "and in our pro-qualifiers for the Heineken cup our third win against Glasgow ensured our place in the competition."

The Borders, who have been drawing crowds of around 4,500 to their newly built pitch at Galashiels, are, in effect, in their second incarnation. A professional Scottish rugby team, called the "Scottish Borders" was created six years ago to rival Edinburgh and Glasgow, but they played just two seasons, before financial restraints closed them down.

This time round, Alastair Cranston, who managed the original side, says that the S.R.U. made a conscious decision to change the name.

"At the Scottish Rugby Union's A.G.M. in 2001, when it was decided to recreate a Borders team, we wanted people to think of the Borders first and Scotland second. This area has historically moved from within one national boundary to another, and has a distinct character all of its own. Many people here don't think that they've reached England until they get to Newcastle. The Borders gives the team a wider appeal which encapsulates northern England."

Having decided on the new name, and chosen Galashiels above Hawick as the venue, the next priority was an International quality pitch. J Pugh-Lewis Ltd., the Chesterfield based sports field constructors, and Sheffield based Premier Pitches, won the contract and arrived for their first site visit early in 2002. Director, Tim Pugh-Lewis explains The Borders' brief: 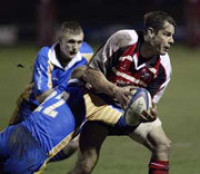 "The new squad would contain former and current Scottish Internationals, as well as, possibly, overseas players." He says: "Rugby players, (especially at international level), have changed from the 16 stone, beer drinking men of the past, who were happy to run around in the mud. The game now requires quick, fast, hardwearing surfaces, similar to those found on top-level football pitches. This site is already home to the Gala rugby club, Galashiels' home team, who play on Saturdays, (leaving Fridays for The Borders), and previously many games had been lost due to frost. Under soil heating was a top priority, followed by drainage and stability."

Construction started last June with 14 weeks to go before the first home game against Leinster, the Irish professionals, on 27th September.

A new 100mm thick, free-draining playing surface was created using 75mm of imported root zone, with a sand/soil ratio of 80/20, combined with 25mms of concentrated Fibresand root zone. It was during this stage that the hot water undersoil heating system was installed.

"We seeded on 23rd July," remembers Carl Pass of Premier Pitches. "The Borders vs. Leinster match went ahead as planned on the new pitch and the home team won."

"We're very pleased with our new pitch and happy with the on-going service provided by the contractors," says Alastair Cranston. "We have plans for a practice ground to bring on new players, which will be up to this standard but without the under soil heating. We hope that both J Pugh-Lewis Ltd and Premier Pitches will feature strongly in our future."

For further information on the sports field construction services provided by J Pugh-Lewis Ltd., contact the company on Tel: 01773 872362.